Jackie was a student at Odessa, TX's Union Wells High School. She was, with Claire Bennet, a co-captain of the cheerleading squad. Jackie constantly made fun of Zach, and later Claire after the two continued to hang out. On Homecoming, Jackie was killed by Sylar, mistaking her for Claire.

At school, Jackie talks with Claire Bennet while trying to get the attention of Brody Mitchum. Brody doesn't pay attention to Jackie so she turns her focus on teasing Zach, whom she refers to as being gay. Principal Marks then tells Claire and Jackie that the police would like to talk to them about a train wreck. When Claire fails to step forward and acknowledge her rescue of the injured fireman at the train wreck, Jackie claims she rescued the man, becoming honored as a fire fighter.

Jackie tells Mr. Bennet that she plans to spin the rescue as her platform for class president elections. She also tells Brody that Claire was looking for her birth parents, even though Claire had told her so in confidence.

At school, Jackie and Brody approach Claire and Zach. Jackie asks Claire what happened to her last night at the bonfire. When Brody, who tried to rape Claire the night before, excuses himself to go to the bathroom, Jackie says that Brody must have a bladder the size of a pea.

Later, Claire waits outside the school and tells Brody that she needs a ride home because Jackie left without her. 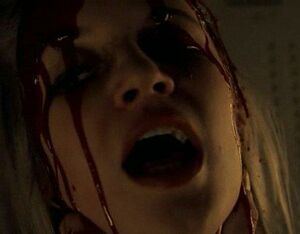 Jackie is killed by Sylar.

Jackie harasses Claire about running for Homecoming Queen after nearly killing Brody in the car accident. Soon afterward, despite her friend's insistence not to "spaz out," Jackie is shocked and disappointed when she finds out that Claire actually won the homecoming queen role through the "freak vote".

Later on, after Claire and Zach discuss their friendship, Jackie comes across them and begins to insult Zach. Seconds later, Claire punches Jackie in the face and knocks her down.

Later on in the day, Jackie is found in the locker room at her high school, getting the cheerleaders pumped up for the half-time show. Upon finding Claire present and suited up for the show, she gets angry and accuses Claire of being a "menace". Claire recites advice given to her by Zach but Jackie tells her it sounds like loser advice. The lights then go out, resulting in Jackie complaining about public schools. Claire hears a noise but Jackie tells her to stop it as she is freaking her out. Jackie thinks Claire doesn't want the homecoming tiara and tells her that she would be more than happy to go and get it herself. Sylar then appears and grabs Jackie by the throat.

Sylar pins her to some lockers and continues to choke her as he throws Claire away. Jackie screams in terror and pain as Sylar proceeds to remove the top of her head. Blood pours down her face and Jackie turns to a now regenerating Claire and says her last word: "run...". Sylar drops Jackie's lifeless body, which is later found by Mr. Bennet

Six months before her death, Jackie visits Claire in her bedroom. She tells her Lori Tremmel has quit the cheerleading squad after sleeping with the entire football team. Jackie then offers Claire her place and tells her to put the uniform on so they can commemorate the event. Claire says she will put it on later and Jackie makes a comment about Lori, prompting an argument over her "being a bitch". As she argues with Claire, Claire falls and smashes her hand against a glass-paned shelf. Jackie watches as Mrs. Bennet attempts to stop the bleeding and rushes to get her keys when Mrs. Bennet says it will need stitches.

Matt and Audrey investigate Jackie's murder scene at Union Wells and later tell Peter Petrelli that the cheerleader that was murdered was named Jackie Wilcox.

Angela Bromstad reports that Union Wells has reopened for the first time since the Homecoming Dance. Near the lockers, there is a memorial to Jackie's death.

Gretchen, from Austin, recalls hearing about the "cheerleader in Texas [who] gets her head sawed off at the Homecoming game". 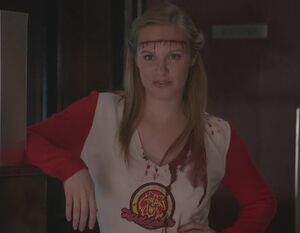 Jackie leads Claire and other cheerleaders the day before Homecoming to the bus station where they greet their competitors and perform several cheers.

During the trial taking place in Hiro's mind for his attempts to change the past, Jackie appears with her head sliced, scolding Hiro for the consequences of his deal with Sylar.

In Claire's fifth MySpace post, "Thank You!", Claire thanks her followers for all of the support about Jackie.

In Zach’s ninth MySpace post, “Rumors”, Zach claims that rumors must be true that Jackie Wilcox was murdered at the homecoming game. Zach says that people believe it was the same murderer who killed the Burnt Toast waitress the week before.

In Zach’s tenth MySpace post, “Seriously Freaking Out”, Zach claims that the cheerleaders are hacking into his MySpace account. He blames Claire because she wanted to talk to him on the field. He thinks that it is nice of them to continue to pick on him right after Jackie was murdered.

Please refer to Theory:Jackie Wilcox for fan-created theories and other speculation.