Split Personality Disorder, more formally known as Dissociative Identity Disorder, and previously referred to as Multiple Personality Disorder, is a condition that Niki Sanders and later Sylar and Matt Parkman exhibit. The disorder results in different alters (or alternate personalities) asserting themselves at a given time. Niki has two alters: Jessica and Gina. Sylar's manifests as his mother, Virginia, and in contrast to Niki he undergoes an actual physical transformation to become his alter. Matt, after telepathically erasing the psyche of Sylar from Sylar's own body, inadverently absorbed into himself and battled Sylar for control of his own body.

Niki talks to Micah's principal about Micah's tuition. She sees her reflection in a fish tank moving differently than she is and yells at it to "leave me alone". When she drops Micah off at her friend Tina's house, she tells her that she sometimes sees and hears a strange "other" person, but Tina fails to understand. Her reflection appears to be "delayed".

Later, Linderman's thugs break into her house and demand the money she borrowed from Mr. Linderman. She attempts to escape, but fails. The thugs suggest she performs for them on camera. She refuses, and they strike her. Sometime later, she awakens to find the bodies of the thugs mutilated. She looks into a mirror and finds that her reflection is covered in blood when she is not, and is gesturing for her to keep quiet.

Niki discovers that her alter ego has put the bodies of the thugs in the trunk of a Cadillac, along with a map.

Niki is assaulted by Linderman's henchman, and switches to her alter-ego. Her alter-ego beats the thug up, calls Micah "our son", and goes to Nathan's hotel room to sleep with him.

Niki has a full conversation with Jessica, who reveals much of Niki's unaccounted-for time. Jessica asserts herself as a protector and as being the one "strong enough" to take care of Niki and Micah. Jessica convinces Niki that D.L. will take Micah, and that Niki should take action. As Niki retrieves the money, D.L. catches her. Niki tries to explain, but Jessica takes over and beats D.L. up.

Niki regains consciousness on the floor of her bedroom to find D.L. and Micah gone, along with the money. Tina comes over, and Niki explains that she has an alter-ego named Jessica. Tina tries to tells her that Jessica isn't real; Jessica takes over and tells Tina to leave.

Jessica tries her rifle and sets out to find D.L. and Micah, as Niki watches helplessly from a van's side-view mirror.

Jessica visits Hal's hotel room and tells him how he abused Niki's sister to the point of accidentally killing her. She bloodies his nose and stuffs the check he gave Niki in his mouth tells Hal to never come back, and then leaves.

Jessica, having shot D.L., catches Niki's pleading reflection in the car's window, but dismisses her, slamming the car door so forcefully the glass shatters. As she searches for her son and husband, she sees her reflection in a puddle and Niki argues with her. Both are alerted by Micah's screams, and go to find him. D.L. and Jessica have an altercation, injuring Micah in the process. Realizing that her alter ego is out of control, Niki takes over again, and turns herself in to the authorities.

Niki meets with her attorney in prison. Niki and Jessica keep alternately asserting themselves while having an argument over how to handle their trial. The attorney remarks that multiple personality disorder is hard to sell to a jury. Jessica tells him to get them a shrink; Niki tries to dissuade him.

Jessica encounters and kills Nathan's FBI support listening in on Nathan's attempt to obtain evidence to indite Mr. Linderman of several crimes. When she finally encounters Nathan, Niki is in control. She explains that Mr. Linderman already knows about the FBI and the wire and that the FBI agents are dead. She then asserts that if he knocks her out, Jessica will not be able to prevent Nathan from killing Mr. Linderman.

Jessica gives up control to Niki willingly after being offered money to kill DL and saying its not what Niki would do. This is the last time Jessica emerges.

Niki is attacked by what seems to be like Jessica outside of her body and is beaten up until she sees the real Jessica in a shard of mirror. Jessica doesn't take control and encourages Niki to defeat the fake Jessica herself. Thanks to Jessica's encouragment, Niki gains control of her super-strength and defeats her opponet who is really Candice Wilmer. When Niki looks in a mirror after rescuing Micah, Jessica is gone from her reflection. Jessica never returns or appears in mirrors after this.

Niki gives herself in to the Company, who say they can fix her disorder.

An alter ego of Niki's attacks Bob within the Company building, and pins him against the wall, choking him. She is then tasered by Mohinder. Once she has been taken back to her room, she tells Mohinder that it is vital she is kept locked up.

Gina manifests while Niki is looking in the mirror. She then proceeds to a Los Angeles nightclub. Niki regains control after D.L. shows her a photograph of their family.

According to Bob, sometimes when abilities first manifest, "the way the mind deals with the new reality sometimes results in a fracture of sorts--a split personality." When Niki declares that she is "done" with Jessica, Bob asks her how she knows that a new personality won't emerge. 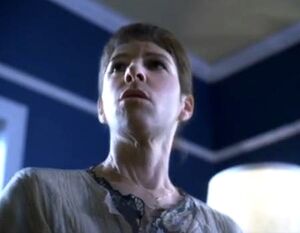 Sylar switches between himself and his mother.

Sylar requests the evidence of the Virginia Gray murder case and begins to talk with his adopted mother about the events of his life with her. It is revealed he is talking to himself by use of his ability and 'Virginia' explains that when he killed her he lost a part of himself but now she's here to take care of him.

After being rescued by Sylar, Micah overhears a conversation between Sylar and his 'Mother' about taking care of Micah but it is cut short when he realizes Micah is listening. Micah explains his mom suffered from the same condition but overcame it to become a Hero; to which Sylar orders him gone. When Sylar breaks into Nathan's office he begins to talk with Virginia about how privileged Nathan was and is goaded into deciding to pose as Nathan and eventually the President.

Matt Parkman awakes after apparently sleeping with his own wife, yet not remebering any of it. The pyche of Sylar appears to him stating that he took control and enjoyed the company of Janice. Feeling unsafe at the fact that Sylar could control him at any moment he tells Janice to leave and take Matt Jr. with her. Matt begins to drink heavy alcohol and realizes that with every swig, Sylar seems to get weaker. Matt continues to drink until the image of Sylar disappears and he, himself, passes out. Upon waking up Matt is greeted by Janice, who has returned with Matt's partner Mike. Matt reassures them that everything is better. Mike passes back Matt's AA chip re-signifing day one of his sobriety. Matt leaves telling the other he needs a shower, but as he rounds the corner it is revealed that it is actually Sylar in control of Matt's body. He taunts Matt, who is now nothing but a imprisoned mental figment.

After tracking down Matt, Peter heals Matt's wounds and Matt tries to warn them of the presence of Sylar in his head. Sylar eventually takes control of Matt once again and tries to entice Nathan in his own body into touching his hand so Sylar can return to it. When a cop interrupts them, Nathan's hand brushes Matt's as he turns around and Sylar leaves Matt's mind and returns to his own body. However, Nathan's personality remains in control and escapes with Peter. Nathan later expresses fear to Peter that Sylar will regain control of his body soon.

At Thanksgiving dinner, Sylar's personality resurfaces and retakes control of his body from Nathan. Sylar tries to kill Peter and Angela, but the copy of Nathan's mind still exists inside Sylar's head and the two personalities fight for control of Sylar's body. Nathan's persona emerges victorious and flies away to save his family, disgusted by what Angela did to him.

Desperate to save his brother, Peter decides to help Nathan's personality gain permanent control of Sylar's body. To this end, Peter replicates Rene's power. Sylar, having regained control of his body since the last time Peter saw him, attacks Peter, disguised as Nurse Hammer at first. Using Rene's power, Peter is able to disable Sylar's abilities and defeat him. Peter demands Sylar let Nathan back out but Sylar refuses. To help Nathan, Peter starts erasing Sylar's mind. Finally, with Peter's help, Nathan's personality regains control over Sylar's body. However, Nathan's personality is weakened and he doesn't believe he can last long. Peter takes Nathan to the rooftop where he once tried to convince Nathan he could fly in an attempt to help remind Nathan of who he is, but Nathan starts losing his grip with elements of Sylar's personality emerging briefly. Unable to hold on to himself anymore, Nathan throws himself off the roof in an attempt to commit suicide. Peter stops him, but Nathan convinces Peter that he is gone and let him go. Nathan then falls to the ground, returning to Sylar's form as he hits a cab below. After he regenerates, Sylar is firmly back in control and Nathan's personality is gone for good.

According to Julien Dumont's assignment tracker profile at primatechpaper.com, Julien's cloning ability puts him at high risk of dissociative identity disorder. "The Company has implemented rigorous psychological supervision, as well as chemical and psychoanalytic intervention as necessary."