Are we seriously putting that? It sounds like one of the coined terms on the Activating Evolution wiki where they just add "kinesis" to the end of a prefix. --Bob 01:51, 4 April 2007 (EDT)

I think it was actually more correct without to be inserted. Because of parallel structure, it now reads

I think the text is referring to the plants' abilities to bear fruit in abundance, and not to the abundance of the plants themselves.--Hardvice (talk) 13:51, 4 April 2007 (EDT)

I know we can't post it yet because it hasn't aired yet, but would you consider Linderman's power plant control? And if so does he have a connection to Au Co? User: Jason Garrick

I think Linderman isn't Austin, because in the comics he needed to have contact with the thing he's healing and if you saw the clip (http://www.heroestheseries.com/video-linderman-reveals-his-power/) he just waves his arm, but, then again, Linderman may have advanced his power over the years.--Patrick 20:13, 8 April 2007 (EDT)

Au Co could only make plants grow faster, she never made them move unnaturally, like killing people. Nor she became plant like. Intuitive Empath - Talk - Contributions 18:06, 19 June 2009 (EDT)

And therefore we can't say they're the same, so we say they're different, assuming it's the same ability is much more speculative than to assume it's not. Intuitive Empath - Talk - Contributions 18:47, 22 June 2009 (EDT)

Although ian said he needed water I think that was based on the fact that the land had no moisture in it at all (which is why the camera had a close upof ian holding the dust). I think we should note down that this was in a place with dusty soil and little moisture. Also, given his ability is plant growth, that implys that he needs the same conditions to be met as though plants were growing normally, but he makes the process much faster. I just think this should be noted somewhere. --mc_hammark 05:43, 6 January 2010 (EST)

It looked like Ian spontaneously created plant life from nothing in the desert, is there any explantion to how he suddenly created a field of grass and flowers without any seed?--PJDEP - Need further explanation? 15:31, 6 January 2010 (EST)

Why can't this be the name of the ability? Both characters who have displayed this ability actually INDUCES the growth of the plants, though at varying speed. It's a better-describing name, I guess. Thoughts?-- Realistic

I know when we first saw plant growth and it was changed to an episodic ability we changed the image almost immediately, but I'd like to suggest we change it to this. 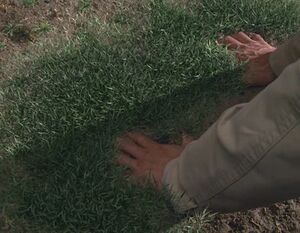 This shows Ian's hands touching the grass and bits of the dry desert at the top and bottom. The one we have now also has Samuel and Claire in it, which distracts from the ability, something we try to avoid. --mc_hammark 06:03, 18 January 2010 (EST)