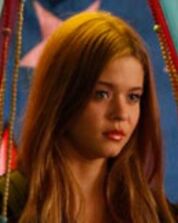 76%
Amanda was initially abandoned by his mother, Lydia, at his aunt Carol. Now a teenager, Amanda has been in contact via phone with his mother at Sullivan Bros. Carnival. He then reached and was immediately accepted by the chief, Samuel and others Carnies. Accidentally killed one of them, Caleb, as he tried to molest her. Now lives quietly with his mother at the Carnival.