Berlin is the capital and largest city of Germany. It is also a major center for politics, science, culture and media in Europe.

In a mid-sized van, Devin stakes out the location in Berlin he believes the German will rob. His partner, Bianca, later decides to join him from a restaurant, and proceeds to walk to the stakeout location.

After staying on stakeout in front of the German's apartment building until an hour after he should have shown, Devin and Bianca head inside, go upstairs and into the apartment.

Later, Devin and Bianca rush back to their van and Devin drives it towards the hotel where Gael is staying. Devin drives very fast to the hotel, and over pedestrian walkways, almost running into several people and a cat that one lady is walking on a leash.

Hiro places a tracking device under Daphne's medal; he watches a tracking screen hone in on Berlin as Daphne speeds off to the city to obtain the other half of the formula. 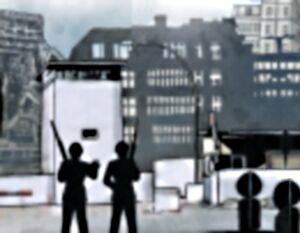 Daphne, Hiro, and Ando visit a moviehaus in Berlin, where the Haitian and Angela's aide are also.

In 1988, Noah and Sandra Bennet are in Berlin for their honeymoon.

Also, according to Primatech's files, the Company track an |evolved human in Berlin, and Claude Rains and Eric Thompson, Jr. go there for bag and tag the girl. They share Claude's invisibility to pass the border post between West and East Berlin.