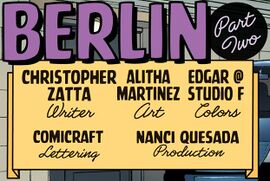 Devin and Bianca are on stakeout outside the German's apartment building. After waiting a hour after the time the German was supposed to show up, they head inside the building to the apartment to see if there are any clues as to the delay. When they find the apartment door open, but no one inside, they realize the German was tipped off and arrived through the back entrance. They also find that there is a photo of Gael on the German's desk along with an empty automatic pistol holder. Bianca notes that the German's information also includes where Gael is staying, and they rush to get to him.

Meanwhile, the German smashes through the door of the Berlin hotel room where Gael is resting, and the German quickly clamps Gael to the wall with the metal support bars from the bed. Devin and Bianca, guns at the ready, arrive at the hotel room just as the German shoots Gael in the stomach. Devin then shoots a few rounds at the German. Devin misses, but this buys Bianca enough time to free Gael and help him into the hotel hallway. The German then uses his ability to send multiple rounds from his gun into Devin, killing him. Next, Gael hands Bianca a gas canister from one of their backpacks. Bianca opens the canister and throws it into the hotel room, partially obstructing both the German's vision and breathing. The gas doesn't affect Bianca'a breathing due to her ability, so she easily knocks out the German, capturing him alive.