Brody flirts with Claire. He later collides with her on the football field during practice breaking her neck. She uses her powers to heal herself before anyone except Zach is able to see.

At the bonfire, Brody seems perfectly charming to Claire. He can tell she hasn't been herself lately and is determined to make her laugh. However, when Claire tries to put the brakes on their physical relationship, he attempts to rape her. In the struggle, she falls and her head is impaled on a tree branch. 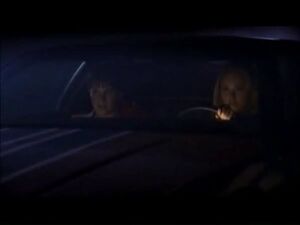 Brody, about to taste sweet revenge

Brody is shocked to see Claire at school the next day, but seems relieved that she doesn't seem to remember what happened.

Claire later discovers from Lori Tremmel that she was not the first victim of Brody's predatory assaults. When Claire sees Brody coming on to a new girl, she is prompted to seek revenge by crashing Brody's car headlong into a brick wall--with Brody in it.

After Claire pulls him out of his burning car, he sees Claire healing, prompting Brody to say, "What are you?"

Brody survives the accident but is badly injured. While at the hospital Mr. Bennet confronts Brody about his attempted rape. Instead of killing Brody, Mr. Bennet has his associate erase his mind completely. When Claire tries to talk to him subsequently he claims he doesn't know who she is or why she keeps calling him Brody.

As Claire and Jackie go to check the Homecoming Queen announcement, they walk past a heavily bandaged Brody in his wheelchair. Jackie tells Claire she thinks Claire is kind of nervy to think she might be Homecoming Queen after sidelining the star quarterback and ruining any chance of Union Wells even winning the Homecoming game.

When Hiro goes back in time to save Charlie, he hides from Sylar behind a newspaper called the Midland Chronicle. One of the headlines states "Wildcats QB Out For The Count", referring to Brody's accident.

In Claire's fourth MySpace post, "Homecoming", Claire encourages everyone to come to Homecoming. She is worried that she won't have a date or even get voted as Homecoming Queen after everything that happened with Brody.

In Zach’s third MySpace post, “Bears Game”, Zach posts about the Union Wells away football game against the Bears that he is going to. He says he is mostly going to support Claire because the football players like Brody Mitchum are jerks. He wonders why Claire gives Brody the time of day.

In Zach’s fourth MySpace post, “Brody and Claire”, Zach posts about how Union Wells won the game thanks to Brody. He comments on things people like about Brody. One of the things he mentions is his car and wonders what would happen if something happened to the car.

In Zach’s fifth MySpace post, “Just another day in dullsville”, Zach tells his followers about how Brody got in a real bad car accident and how he regrets what he said in his last post.

In Zach’s seventh MySpace post, “In the sunshine of your…”, Zach posts about things that are happening at Union Wells. He claims that people are still shocked at what happened to Brody, that Brody will be back for homecoming, and that he is not interested in Claire.

In Zach’s eighth MySpace post, “Come Home”, Zach posts about how homecoming is coming up and with everything that has happened to Brody, Union Wells will probably not win.