Audrey Hanson is an FBI agent involved in the Sylar case.

While at the scene of a murdered family (a crime for which Sylar is the prime suspect), Audrey witnesses Officer Matt Parkman finding the only survivor, a little girl, in a hidden room without any help. When he is unable to explain why he knows the name "Sylar", which only six people on the case know, she arrests him and takes him in for questioning. 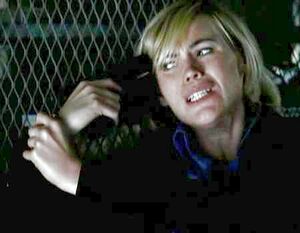 Matt convinces Audrey of his telepathy and she asks him to help the FBI find Sylar. She asks him to speak to Molly Walker, the little girl rescued from the crime scene. As they approach the safe room where Molly is being kept at the FBI Headquarters, they hear the girl scream and see a man Audrey presumes to be Sylar dragging her off. Matt comforts the girl while Audrey pursues the suspect. She draws her gun on him and orders him to stop, but she is somehow hurled backward. He then somehow makes her point her gun at her own head, but before he can make her fire, Matt arrives and fires several shots at the suspect, who gets up and escapes.

Audrey arrives at Matt's precinct and claims Sylar has killed again. At the morgue, she shows him the burned and irradiated body of Robert Fresco, an oncologist at UCLA. She tells Matt they found a fingerprint seared to the bone, and the CODIS database finds a match: Theodore Sprague.

Matt and Audrey investigate the house and find its contents badly burned, and the bedroom shows dangerous levels of radiation. Matt tells her he doesn't think the murder has anything to do with Sylar because he found pills prescribed by Dr. Fresco to Karen Sprague.

At the hospital, Audrey and Matt encounter a distraught Ted over the body of his dying wife. When Ted grabs a nurse as a hostage, Matt is able to talk him down by allowing him one last conversation with his comatose wife. After Karen dies, Audrey decides to go downtown for Ted's processing. She encourages Matt to call Janice.

Later, Matt discovers that Audrey has arranged for him to take the detective exam as a series of oral interviews, so his dyslexia won't be a problem.

The other FBI Agent gives Audrey one hour to interrogate Ted. Audrey yells at Matt for hitting his partner and possibly messing up her investigation, but then confesses to him how her job doesn’t make sense any more because of the people with unexplainable abilities.

During the interrogation, Ted threatens to blow up the building and Audrey pulls her gun on him until Matt settles Ted down. She listens as Ted tells his story about blacking out and asks him if there are any other bodies they should know about. When the FBI agent takes Ted away she tells Matt the situation is out of her hands.

That night, Audrey calls Matt to tell him that Ted has escaped.

Three months ago, Audrey is in Chicago investigating a crime scene where Sylar is the suspect. Audrey spots him in the crowd, and starts chasing him. At a train station, Audrey mistakes an old man for Sylar and shoots at him, accidentally killing him.

Audrey and Matt arrive in Odessa, TX to investigate the murder of Jackie Wilcox at the Union Wells High School Homecoming. Matt notes that Jackie's brain wasn't removed, but that an incision was made. They find a trail of blood and three sets of footprints on the hill where Sylar was captured by Eden and the Haitian. Audrey tells Matt that the local police have a suspect in custody: a hospice nurse from New York City named Peter Petrelli.

At the Odessa Sheriff's Department, Audrey and Matt question Peter. On Nathan's advice, Peter declines to answer their questions, and when Matt tries to read Peter's thoughts, a feedback loop is created as Peter mimics Matt's power. During the interview, Peter reveals Claire's name and the message, and Audrey reveals that Jackie has been murdered. Matt verifies that Peter is telling the truth. 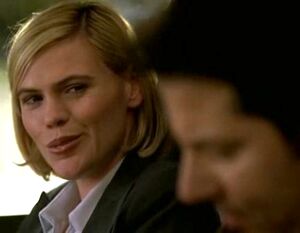 Audrey and Matt laugh over a stray thought.

Later, Audrey questions Claire in Mr. Bennet's presence. When Claire remains evasive, Audrey asks Matt, who was waiting outside the room, if he was able to determine what Claire was hiding, but he tells her there was only silence—the same silence he experienced just before he blacked out in the bar.

Matt convinces Audrey to stake out the Primatech Paper Co.. Outside in the car, he reads Audrey's stray thought that he's cute, but Audrey tells him that she's not interested in him because he's married. Just then, Mr. Bennet and the Haitian come out of the facility. Matt strains to hear their thoughts so hard his nose bleeds, but he picks up only a single word: Sylar.

Audrey goes to the Primatech Paper Co. for a SWAT raid. They plan to find Sylar, but they are unsuccessful in discovering evidence that resembles anything other than an ordinary paper factory. Agent Thayer reprimands Audrey for following Matt's hunch, and temporarily suspends her. Frustrated, Audrey decides that Matt's telepathic powers aren't real after all, and that both of them need to return to reality.

Audrey and other FBI agents arrest Ted Sprague New York after receiving a phone tip. Audrey remarks how she has been following Sprague, and how he will be shipped off to Guantanamo for his alleged acts of terrorism. As Ted is taken away, Audrey turns to thank a man calling himself Isaac Mendez for calling in the tip. Their conversation ends abruptly as the tipster disappears behind her back. Later on, at the site of Ted's death, Audrey watches as two police officers ponder the cause. In a somewhat frustrated and jaded tone, she informs the officers they are better off not knowing.

"Oh. What personality would that be?"

"And the female personality?"

"Bitches. We keep it in the canine family."

Please refer to Theory:Audrey Hanson for fan-created theories and other speculation.