From Heroes Wiki
(Redirected from Mr. Parkman)
Jump to navigation Jump to search

Maury Parkman was an evolved human with the power of telepathy, and is the father of Matt Parkman, whom Maury abandoned. Maury was a founder of the Company.

When Matt Parkman asks Molly how her power works, she states that she thinks of someone in her mind and then pinpoints their location on a map. Matt asks whether she can find anyone in the world just by thinking about them, to which she hesitantly responds that she can find "almost anyone", but there's one that she can't. Parkman asks, "is it someone bad, Molly, like the boogeyman?", and she hesitantly responds, "No, he's a lot worse". When Matt asks Molly why she doesn't want to find him, Molly replies in a terrified whisper, "'Cause when I think about him, he can see me."

When Miss Gerber tells Matt that Molly has mentioned having some terrible nightmares, she shows him some drawings that Molly drew. Each picture depicts eyes alongside the symbol. Later that night while Molly restlessly slept, Matt checks in on Molly, and hears her thoughts. Amongst these thoughts is a male voice, saying "I can see you." When Molly wakes up with a scream, Matt asks her to tell him where the person is, and Molly tells Matt that if she did, the man would kill Matt.

After Matt makes a discovery about his father, he explains to Molly that his father left home when Matt was thirteen after giving Matt $120 and a pat on the head. Matt asks Molly to find Mr. Parkman. When Matt shows Molly a picture, she backs off and asks him to get it away. She states that Matt's father is "the nightmare man." Later that night, Matt is desperate to ask Molly to find him, but Mohinder forbids it. Molly volunteers herself however, and upon finding his location, becomes scared because he could see her. She screams, then blacks out. Matt reads her mind, and notices she is screaming "Help me, Matt!" 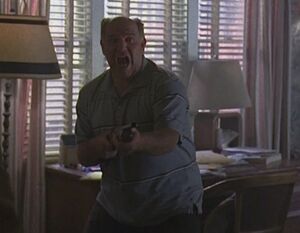 Maury is surprised when Nathan and Matt kick in his front door. Hearing Nathan call Matt "Parkman," Maury asks Matt by name if it is really him. Maury wants to know why Matt is there, and Matt asks what he's doing to Molly and what he knows about Kaito's death. Matt quickly disarms Maury and handcuffs him. When Nathan asks why he's armed, Maury motions to the table, where Nathan finds a similar death threat picture to his mother and Kaito. Maury tells Matt that Molly was looking for him, and that he was trying to protect himself. Maury tells Nathan that he met the Petrellis, Linderman, Kaito and others a while ago. When Nathan tells Matt to read his mind, Maury finds it amazing. When Matt tries to read his father's mind, he gets a block and his father tells him that it hurts for a reason, and that he'll explain.

Maury then walks into the kitchen, and through an inner-door on the other side. Matt and Nathan quickly pursue one at a time. Maury proceeds to show them the advanced extent of his telepathic ability. When Matt goes through the door, he appears to be in prison, with haunting visits from his ex-wife Janice and her son. When Nathan follows through the door immediately after Matt, however, instead of being inside a prison with Matt, Nathan is confronted with a nuclear destroyed New York City view, from atop the Deveaux rooftop, and is haunted by his irradiated alter-ego. While these two venues are occurring simultaneously within the room, unbeknownst to one another, Maury returns back out of the room, crosses through the kitchen, and leaves his apartment. Eventually Matt and Nathan are able to break free due to Matt's first advanced use of his own ability. Matt then comments, "Now I know why Molly calls him the Nightmare Man."

In the cockroaches, the faces that Molly draws of Maury with the symbol appear in the same shape.

Matt, Nathan, Mohinder, Niki, and Bob team up to stop Maury, who is coming to kill Bob. While in The Company's hospital, Maury causes Niki to see D.L.. The fake D.L. tells Niki she needs to kill Bob. Maury also traps Matt in a nightmare alongside Molly, in Matt's childhood home. Matt brings Maury into the dream as well then frees himself and Molly, trapping Maury in his own nightmare. After waking up, Matt finds Maury unconscious.

Matt looks at the picture of the group of twelve, where a note next to the image of Maury says "Incarcerated". Later, Angela Petrelli tells Matt that if he forces secrets out of her, he will become his father.

Angela Petrelli has a precognitive dream which shows a number of people dead, including Hiro, Claire, and Matt. In this dream, she sees a group of villains: Maury, a woman appearing to be Tracy Strauss, Knox, Adam Monroe, and Sylar.

Sandra looks through some of Noah's files, including one about Maury.

At the Pinehearst building, Daphne speaks to Linderman, but realizes that he is just a figment of her imagination. Linderman's image orders Daphne to recruit Matt Parkman. After she leaves, Maury comes out of hiding and goes into the building, where he telepathically speaks with Arthur Petrelli. During this conversation, he reveals that all of Linderman's appearances since his death have been illusions created by Maury's telepathy. 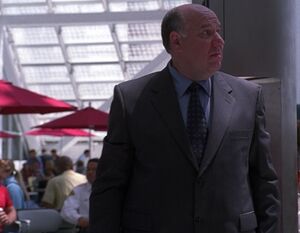 Maury is present with Daphne, Knox, and Flint, when Arthur steals Peter's ability.

Maury is present with Arthur when confronting Daphne about failing to recruit Matt for Pinehearst. When Arthur explains that Daphne will have to kill Matt, Maury is shocked. He reminds Arthur of their arrangement, which was Maury's service for Matt's safety. Arthur then breaks Maury's neck telekinetically, killing him, and then dryly thanking him for his years of service.

Later, Matt finds out about his father's death when reading Daphne's mind. After using his own telepathy to fool Knox with an illusion, Matt tells Daphne that he got the idea from Maury himself and his illusions, though Matt's prove to be better than Maury's as he is able to fool Knox's sense of touch while Maury couldn't fool Daphne's with his visions of Linderman.

In 1978, Arthur introduces Maury to Angela, Kaito, Charles, and Bob on Charles Deveaux's rooftop. Arthur lets everyone know that Maury can use his ability just as well as the ailing Charles.

The Company has an Assignment Tracker 2.0 file on Maury which elaborates on his family history. The file also sheds light on Maury's blue collar upbringing, the various odd jobs he worked, and how he discovered his ability. Additionally, the file traces his marriage (and its decimation), the birth of his son Matt, and his Company assignment to TMI and Bhutan. Finally, his personal history ends with his death at Pinehearst Headquarters at the hands of Arthur Petrelli. Maury's psychological profile, mired in mystery, unconfirmed sources, and contention, reveals that Maury's mother may have possessed an ability, too. The "excruciating mental anguish" to which his mother would subject him eventually caused Maury to exhibit a pattern of acute sociopathy.

For Maury Parkman's original Assignment Tracker 2.0 case file housed at primatechpaper.com, see file A011, and enter the password MPapm05ap. For a linked facsimile of the file, including full text and images, see here.

In a roster posted on A Hero's Quest, Eric Thompson, Sr., is listed as going to Astana and Berlin in 1988, for business related to Maury.

In Hiro's eighth blog post, "More Strange Video", Hiro finds a videotape mentioning a Maury and wonders if it is Matt's dad. He reports that he knows that Maury is dead, but he is still scared of him because of what Matt said. He continues to search for Maury's Assignment Tracker file.

In Hiro's ninth blog post, "Memories of Maury", Hiro discovers how Maury came into the Company back in 1978 and discovers that Linderman was the one to bring him in.

In Hiro's tenth blog post, "Numbers Numbers Everywhere", Hiro reports that he has become obsessed with finding out about Maury.

Maury, like his son, was a telepath. However, when they were reacquainted with one another as adults, Maury was far more adept than his son at using his ability. Besides claiming to be able to read minds, he was able to trap people in nightmarish visions that drew off the victim's own thoughts and memories. He could project visions at a more subtle level as well, to the point of convincing a target they were having a conversation with a mental image of an individual though he was unable to fool their sense of touch. He was also able to sense and block mentally intrusive abilities, and damage the minds of people who attempt to do this--such as when he incapacitated Molly when she used her ability to find him, and caused Matt pain when blocking his telepathy.

According to his assignment tracker profile, Maury's biological is at 65, his cerebral is at 100, his elemental is at 55, his temporal/spatial is at 40 and his control index is 98%.

Prior to Heroes Reborn starting, the Heroes Reborn app was released with a video summary of Maury's history. The summary included:

"Then why don't you want to find him?"

"Cause when I think about him, he can see me."

- Matt, Molly (How to Stop an Exploding Man)

"These things that we can do, it only begins at reading minds and then it becomes so much more."

Please refer to Theory:Maury Parkman for fan-created theories and other speculation.