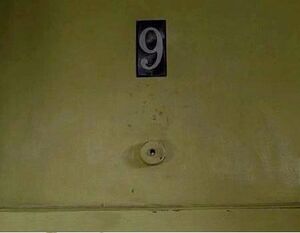 Writers Joe Pokaski and Aron Coleite have commented in a series of interviews titled Behind the Eclipse that fans of the series Heroes should be watching for the number nine (9) to have a significance in the show.

So far, the significance of nine has either been minimal or hidden.

Symbolic Meanings of the Number 9

The numerological significance of just about any number can apply to just about any situation, like a fortune cookie. Does the number 9 really have any more of a special application to Heroes than any other number?

Occurrences of the Number 9

The most apparent episodic use of "9" is the comic book title, 9th Wonders! The title is a play on the original "Seven Wonders of the Ancient World". Many believe other sites built after the original Seven Wonders constitute an "Eighth Wonder"; it is plausible that evolved humans are the "Ninth Wonder". In addition, the title could derive from being even better than the 8th Wonder, a common phrase used to promote things, notably used for King Kong.

The original Seven Wonders are the:

Obviously there are a lot more than 9 people on the show with powers. But there might be a main group of 9. The promotional image of the main characters includes 12 people, 9 of whom are known to have powers. These 9 people appear in Peter's vision.

In all the volumes, the ninth chapter (Homecoming, Cautionary Tales, It's Coming, Turn and Face the Strange, and Brother's Keeper) has been a culmination of events, where a showdown has occurred and/or quite a lot is resolved (albeit leading to other plots).

"That being said, we did lots of research in crafting our stories - some of which came from Hindu and Indian mythology. Remember how we've said the number 9 is important? Has anyone looked into that yet? If you haven't, start digging. Maybe if we're nice, we'll give you some more hints on this for a Hanukkah/Christmas/Kwanzaa present."

"The name certainly means something - but in general we were just looking for an anthology title as cool as "Tales to Astonish" or "Amazing Fantasy". But the number 9 is pretty important in the grand scheme of things."

"Make sure you expand your mythology search to the subcontinent."