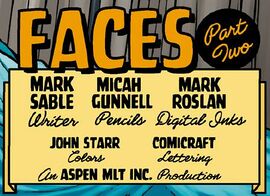 Having reverted to her normal appearance, Penny gets out of bed and sneaks out of the motel room. Thompson, Jr. later joins Penny in the firing range, not realizing she was the one he had slept with the night before. After Thompson, Jr. has left, Connie arrives and tells her she noticed that Penny and Thompson, Jr. are both glowing.

Later, Thompson, Jr. is in a Company work room, and a colleague arrives congratulating him on picking up someone new at the bar. Then, without asking, the colleague proceeds to try and identify the girl he saw Thompson, Jr. with by using the Company's computer system. The data he enters brings up a photo of the girlfriend of one of the Company's targets. Thompson, Jr., seeing that she is listed as an accomplice and that her appearance matches the person he saw the previous night, races off to find her.

Connie and Penny, outside the room watching through a window, see what has happened. Penny then gets her mom to change her back to the girlfriend's appearance, hoping to head Thompson, Jr. off before he reaches her. All three people arrive at the teleporter's house at the same time, and Thompson, Jr. ushers the two women into the house at gunpoint. After Penny explains the situation to Thompson, Jr., he calls for Connie and the Haitian. When they both arrive, Connie reverts Penny's appearance confirming her version of the events; and the Haitian erases the girlfriend's memories so that she would forget what had just transpired. When Penny asks Thompson, Jr. if he is upset with her, he denies it commenting that he thinks it would be great if she could go out with him as someone new every night.