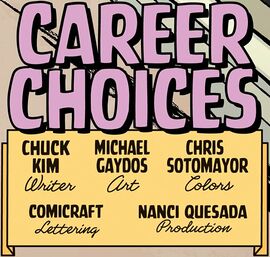 In Primatech Research, Felicia and Donna are finishing a 12-hour combat training session. After Donna says that the training is killing her, Felicia comments on Donna's Company-issued attire. Felicia informs Donna that the have a Company expense account and they go shopping for clothes together. Upon returning, Gael Cruz, a high-ranking Company agent, calls Donna into his office. He tells Donna that she is being taken off mission assignments and combat exercises effective immediately, but does not explain why.

Donna, needing to know the reason, breaks into a file room that night. Donna, expecting the room to be empty, is surprised by Thompson, Jr., who is reading her file. He tells Donna that he is doing research as she's supposed to be his partner on tomorrow's mission, but Donna informs him she has been taken off all missions. Thompson, Jr. tells Donna he doesn't know why, but then spots something in Donna's file. Donna then snatches the file and looks at a photo before Thompson, Jr. can stop her. The photo is of a painting that shows Donna dead, and Donna reacts in disbelief. Thompson, Jr. explains that the photo is real, that it's a painting of the future seen by Isaac Mendez, and that the Company must be trying to protect her by taking her off all missions.