From Heroes Wiki
(Redirected from Into the Wild, Part 2)
Jump to navigation Jump to search 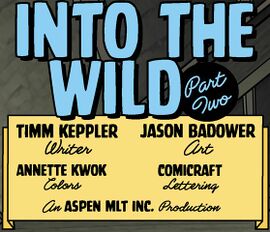 Connie Logan recalls to Sabine the defining moments of her life, beginning 20 years ago with marrying Julien, and continuing when she was a year older, when Gael visits her and Julien in the hospital after she had given birth to Penny. Two years later, Connie signs a form for Gael noting her consent for Julien's blood to be tested and so an attempt could be made to mimic Julien's ability. And after two more years, Gael tells Connie that Julien was killed.

Connie then considers leaving town, but she likes seeing Julien's face. So she dates and falls in love with one of Julien's clones, who informs her that the root Julien is still alive. Connie then forces the clone to take her to him, and she visits the root Julien in his cell at Primatech Research. It is then that Connie decides to make the Company pay, and set him free.

In the present, Sabine then apologizes to Connie, saying she didn't know, and that she needs time to think. But an alarm then goes off in the cabin, meaning that the cabin's perimeter has been breached. Two of the clones then help the root Julien into a black Hummer SUV parked in back of the cabin. Connie and Sabine get inside a Hummer and begin heading down a back exit road into the woods, leading a big convoy of Hummers containing the rest of the Julien clones.

At the same time, Gael, Bianca, and a large battalion of Company agents and squad members meet up with Thompson, Jr. and Donna in front of the cabin. Then, on Thompson, Jr.'s order, many squad members storm the cabin, but no one is inside. Thompson, Jr. reports fresh tire tracks leading into the woods, and Gael orders him to take out Logan and the clones while Bianca and their team secure the package.

Connie and her team approach a bridge. Connie orders the clones out of their vehicles and to take positions as planned. A group of the clones then blocks the road, halting the pursuit of the Company. Thompson, Jr., Donna, and the other Company agents then exit their vans to confront them. The clones on the road use explosive weaponry to take out three Company vans on the road, and Donna and Thompson, Jr. head off the road into the woods to find Connie.