Santiago Cabrera is the film and television actor who portrays Isaac Mendez.

Santiago Cabrera was born in 1978 in Venezuela to a Chilean diplomat and his wife, and has one older and one younger sibling. He has lived all over the world, including Canada, England, Romania, and Chile. He dreamed of pursuing stardom as a soccer player, but a high school drama teacher changed his focus to acting. Santiago trained at the Drama Centre, followed quickly by appearing in several British television series. Santiago is fluent in English, Spanish, French, and Italian, and resides in London while not making Heroes.

Santiago Cabrera's television appearances include the series Empire, BBC's Merlin as "Sir Lancelot", and Alcatraz with Robert Forster. His film credits include Love and Other Disasters and The Taming of the Shrew. 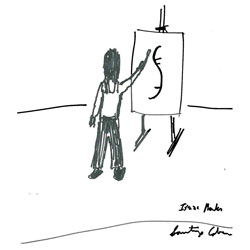 Santiago Cabrera drew this picture of his character in order to raise money for the Pediatric Epilepsy Project.
Retrieved from "https://heroeswiki.ddns.net/index.php?title=Santiago_Cabrera&oldid=168128"
Categories: