I disagree with the name. Adoptive muscle memory. A much better name is Photographic Reflexes or Muscle Mimicry. Can I change it?

I watched Kindness of Strangers and I found that this power resemble's the same power as Peter has .. in some way only here she has to see, feel, smell it (by reflexes) to actually mimic it.. I'm wondering if it would work the same for powers like ... Micah's power that she could learn that .. and see somebody fly and then doing it herself.

So I was wondering if anybody else feels the same way. Couldn't this power also be entitled as Relex Mimicry (I like the title that has already been picked.) But to relate it more to Peter's power.

But what about the name of the ability, could we change it so it would look more like a counterpart to Peter's power of Empathic Mimicry ? DarthYotho 16:12, 16 October 2007 (EDT)

It's not the same. Monica sees something and her brain copies the action done to complete perfection and sends the messages to her muscles to perform it. It's muscle-brain interaction. She can look at Nathan and fly. It has to be human actions. Not superhuman. Elemental5293 00:38, 21 November 2007 (EST)

There seem to be clues that Micah has something to do with Monica acquiring or using this power. They zoomed in on his hand on her back for an uncomfortably long time right before she learned the wrestling move, and he said something about how he wanted to help her with her dream. I didn't notice if he touched her before she learned the tomato trick. But it's also apparently a brand new power for her, and it coincidentally started activating after Micah moved in. I couldn't catch if there's a smoking gun for this connection yet. Did anyone else catch something more? What has to happen before this becomes a part of the power's description and not just a theory?--E rowe 16:35, 16 October 2007 (EDT) 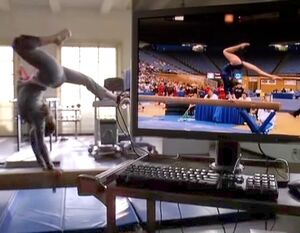 This is pretty minor, but I think it'd be more relevant if the photo for this page was one of Monica memorizing something rather than this kicking picture. Just cuz that'd make it more distinguishable.

DarthYotho- Why does this ability name suggest you are supposed to be a muscular person? It's adoptive muscle memory. It adopts (Mimics) muscle memory, which is what your body remembers doing. You adopt that, and copy the physical actions of other people. Nothing in there suggests being muscular.

Gabriel Bishop- Muscle mimicry? She doesn't become like a muscle.