In Our Lady of Blessed Acceleration, Daphne's partner in crime is captured by the Company. When she returns to her place, someone is waiting and gives her the assignment to gain access to the formula. He claims to be able to keep Samir from telling on her... I'd say it's a safe assumption that Daphne's working for the Company now, but she likely has no idea that she is.--MiamiVolts (talk) 02:01, 23 September 2008 (EDT)

Daphne as a Main Character

I think Daphne should be a main character. So far she has appeared in (I think) every season 3 episode. Albeit she doesn't have her own story, so I guess that's what a supporting character is defined as (a character who adds to another's storyline to create an interesting plot). But since she started working for Pinehearst her story has become kind of independent. I guess we'll have to wait and see. FlamingTomDude 12:58, 16 October 2008 (EDT)

Tristan had added "Other reports claim that Wynn Everett was cast in Daphne's role (as Joy)." to the "Notes" section. I don't recall reading that, but if it's true it should probably be re-added with a source.--MiamiVolts (talk) 02:40, 14 November 2008 (EST)

Daphne has changed sides offical to the "good guys." She openly betrayed Arthur and confessed her betrayal to Parkman. So i suggest we change her occupation to "former agent of Pinehearst"--BlueRavenBoy 12:09, 18 November 2008 (EST)

Daphne and the Winchester Brothers

I just read in the official NBC announcement of "The Eclipse, Part 1" that Daphne is from Lawrence, Kansas. I think this is definitely a bow to Eric Kripke and "Supernatural" because it is also the hometown of the Winchester Boys. I think that's an interesting fact we could put under "Notes". What do other people think of that? -- Spielor 09:34, 20 November 2008 (EST)

Should we add her age now? In the new graphic novel we see her as a three year old at the start, then it goes to twenty four years later at the end (which would be the October 2006 eclipse). That makes her twenty-seven. -- FlamingTomDude.

How did Daphne's ability heal her cerebral palsy? How can you suddenly move and run really fast if you once couldn't stand at all? It doesn't make sense.--Elemental Manipulator - When in doubt, ask BTE 05:42, 6 December 2008 (EST)

My daughter has mild cerebral palsy, and I was touched when Daphne explained what her disability was. I know it was just a momentary glimpse into the disability, but it is interesting to me that her character always has this in her background. Now as I watch Daphne run, I think of my daughter Zoe zipping through a corn field one day.--Mtundu 03:21, 18 December 2008 (EST)

If you are gone

Does anyone think Daphne's image should be changed to the one included? I do. Post if you agree. AJUTChronicles 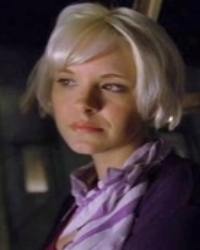 THIS ONE??
Retrieved from "https://heroeswiki.ddns.net/index.php?title=Talk:Daphne_Millbrook&oldid=170866"