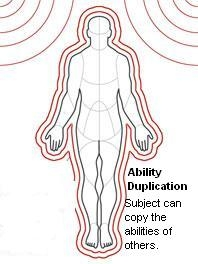 48%
Apart from suffering from Dyslexia, Cody was as normal as they come until he manifested his ability to understand the structure and operation of complex systems and copy others abilities. This tiggered his expectations of being "Better" than he has ever been. He begin hunting and stalking other evolved humans to gain new abilities, until the Company offtered him a job. His first assignment was to take into custody Gabriel Gray after the killing of Trevor Zeitlan, this assignment proved to be a competle failure. Gabriel Gray studied Cody's brain and acquired all of his abilities. Because of Cody's regeneration he survied, but was placed in Level 5 due to risk of developing Sylar's "Hunger". Cody has since than escaped Level 5 in hopes to lead a normal life and duplicate a few more abilities.

(Sylar has used Cody's abilities in many insantnces, including the use of Enhanced Durability and Levitation to evade capture from Matt Parkman and Audrey Hanson as well as Noah Bennet and The Haitian.With the use of Concussive Telekinesis he has enhanced his already powerful ability of Telekinesis.Sylar has used Dynamic camouflage to avoid detection such as in the events of Kirby Plaza. Upon inspection of the Bennet home it seems that Sylar may have used Animal Telepathy during his vist to the Bennets' residence to make contact with Mr. Muggles.Sylar has also used Enhanced Tissue Regeneration to recover from drugs used on him during company testing. It is unknown why Sylar didn't display Lycanthropy from Cody, or how many of these abilities remain after Sylar's infection to the Shanti virus.)

Cody seems to be a quiet loner and tries not to join a side.
Retrieved from "https://heroeswiki.ddns.net/index.php?title=User:Sylar_Fan09&oldid=178494"
Categories: