Graphic Novel:Different and the Same 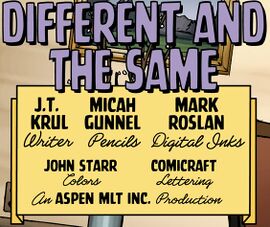 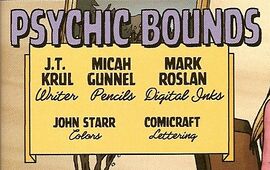 A girl named Piper suffers in school from lack of sleep due to nightmares in which she is abducted by aliens. In one of those nightmares, Piper is visited by Sanjog Iyer. He tells Piper that she must solve the mystery of these dreams herself. Piper finds herself strapped to a table while aliens prepare to examine her. Another girl begs the aliens not to hurt her. She cries out for help but Sanjog says that she needs no help. She only needs to remember her past. She is able to stretch her leg and undo her restraints. The other girl appears down the hallway, beckoning Piper to follow her. As she runs, Piper realizes that the monsters are in fact just humans. The girls try to escape through two windows. The girl introduces herself as Debbie and claims to be Piper's sister, who was separated from her at birth. She says that the place they are in is her home. Piper is able to sneak out through the window with her ability even though it is too small, leaving Debbie mystified and captured when Noah and the Haitian arrive. Piper awakes from her nightmare and tells her parents about her sister. Her mother, thinking her delusional, calls a doctor. The doctor is Noah Bennet, with the Haitian beside him. Noah tells Piper's mother that he will come to fix the problem.