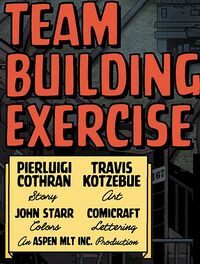 18 years ago in Odessa, Ukraine, Ivan, his partner, Maarten, and their trainee Noah Bennet train yard to search for their target. Noah notes that the partnership between Ivan and Maarten has too much brawn and the team spots their target, the Liquid Man. Ivan tells him to stop and Maarten generates some fire to threaten him. Scared, the Liquid Man rushes forward, using his ability to get past the agents and douse Maarten's fire. Seeing that the two superior agents have failed, Noah makes a suggestion.

Noah gets Ivan to shoot at their target, making him run into Maarten's direction. Maarten shoots flames at him, making him run into Noah, who shoots at him. Surrounded, the Liquid Man backs up until he reaches a storage train. Maarten blocks any chance of escape by firing two concentrated blasts of fire towards his target, and Ivan and Noah aim their guns at him. Seeing no other way, the Liquid Man backs into the cooler, which Noah locks. Ivan and Maarten thank Noah for showing them some new tricks but Noah sees a problem with their mission. How can they tag someone who can become water? Noah, Ivan and Maarten agree to put their heads together to think of a way, all pleased that the Liquid man will not be going anywhere for a while.