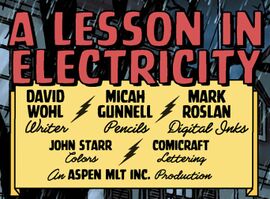 Joseph Priestley reads an entry in his journal from 1767, detailing the account of what Benjamin Franklin told him happened with his famous kite experiment, and which was kept a secret for several years.

According to the account, one night in 1752, Deborah Franklin woke her husband at the sound of his bells, which rang when lightning struck his lightning rod. Benjamin went down the stairs and woke his son, Will, to share the news. Several nights later, Benjamin Franklin and his son proceed outside to test the theory of conservation of charge using the kite experiment. Will gets a kite into the stormy skies and hands the string of the kite to his father. Lightning strikes the kite just as the skies appear to clear up. However, instead of the lightning being totally diverted by a key Benjamin attached to the string, Benjamin ends up shocked with enough electricity to kill a man and later discharges it through his cat. Afterwards, Benjamin does not appear to suffer any injuries from the experiment.

After finishing reading, Joseph closes the journal and places it on a bookshelf, thinking that the world is not ready for that part of the story yet and it may never be.