Episode talk:The Needs of the Many 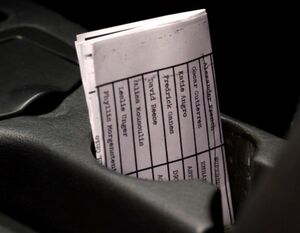 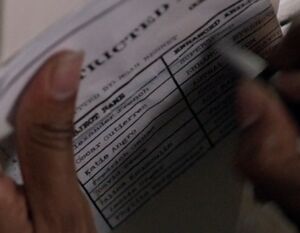 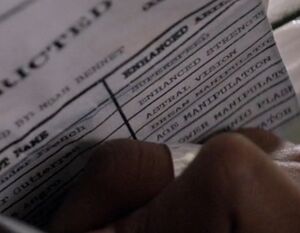 Here are the names. And the thing across them during car scene and shooting scene.

- Fredrick Ganes (DR......) (not sure but might be Dream Manipulation, again bad angle)

- Alisa Kousoulis (no view) (another manipulation word with bad angle)

I uploaded a couple other screenshots of the list from the shot that has Joanne crossing French's name off. If you put the two together, you can see that:

- Alexander French had "Superspeed"
- Oscar Gutierrez had "Enhanced strength"
- Katie Angro has "Astral vision"
- Fredrick Ganes has "Dream manipulation"
- David Reese has "Age manipulation" (Age transferal or age shifting?)
- Alisa Kousoulis has "Power manipulation" (no idea what that is, but it sounds badass)
- Leslie Unger has "-anic pla-" (again, no clue)
- Phyllis Morgenstent has "-ator" (the rest is unreadable in the shadow of Joanne's hand).