Tracy finishes taking a bath in her liquid form. She then decides what to wear and after choosing a blue dress, she goes to see Governor Robert Malden at a restaurant, telling him that she is back.

In Tokyo, Kimiko asks to talk to Hiro. She says that now that they're both adults and the last of the Nakamuras, she and Ando are getting married and she wants Hiro to give her away. Hiro agrees and Kimiko gives Ando the good news. Ando tells Hiro that the wedding is a year away and wonders if Hiro will still be alive. Hiro adds another item to his bucket list of things in the past to use his power to fix, but Ando says he should tell Kimiko the truth. They're interrupted when a call comes in on the Dial a Hero line. A man named Tadashi tells Hiro that he's going to jump from the top of the Nakamura building. Hiro runs to the roof and finds the man, who explains he wants a witness. Hiro recognizes him from Accounting, and Tadashi explains he was fired a month ago. He's been pretending to go to work ever since, and explains he was fired for inappropriate behavior at a New Year's Eve party. Hiro suggests he go back into the past to change things but Tadashi doesn't believe it's possible and jumps. 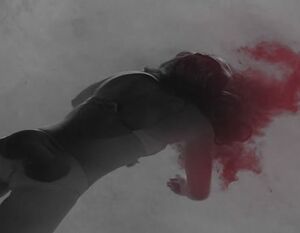 Angela goes to Nathan's office in Washington, D.C., and shows "Nathan" some of his old items from the past. She invites him to examine his toys and Nathan remembers the memories through clairsentience. He remembers a toy airplane that his father gave him when he said he wanted to be a jet pilot. However, when he examines a baseball cap he remembers sitting at a pool as a woman dives in, and then sees her surrounded by blood.

Tracy talks to Governor Malden, who admits that he's missed her and that he can use her expertise. When asked about where she has been, Tracy tells him that she was away dealing with a family emergency, in order to excuse her extended absence. As they chat, Tracy reveals that she is eager to regain her normal life and go back to work as a lobbyist. When Malden then asks her to return, she accepts and Malden calls her "tiger lady" and says he's glad to have her back in his life. They arrange to meet for dinner later that evening, and Tracy departs the restaurant.

Noah has received his divorce papers from Sandra. Peter comes to see Noah and tries to show him the compass tattoo. However, it has disappeared and Noah wonders if he imagined it. Peter admits he doesn't know why he's there and starts to go. Claire is outside and they hug briefly, and Peter says he's going back to work. When she points out he works in New York City, Peter superspeeds away. Noah offers Claire a bowl of cereal.

Kimiko comes to tell Ando that Hiro is giving her away. As she leaves, Hiro teleports in and realizes he's come back several minutes before he left. He takes Ando to see Tadashi but doesn't see him at work. Ando insists that Hiro tell Kimiko the truth. The Dial-A-Hero line rings and Tadashi calls to tell Hiro he's on the roof and is going to jump. Hiro runs back upstairs and Tadashi explains that this time he did something inappropriate at the Emperor's Birthday celebration. Tadashi jumps again and Hiro teleports back in time.

In New York, Nathan comes to see Peter at the hospital. Nathan demonstrates his telekinesis, and explains that he's been discovering he has new powers every day. He also says that he's having someone else's memories from when he touches objects. Peter recognizes the power as psychometrics and talks about Kelly Houston. Peter remembers that she ran away but Nathan says that he tapped into a memory of her diving into a pool and dying. Peter wonders if someone killed her and says that Nathan should go to the house and find out the truth. He asks if Nathan wants to come with him but Nathan says he'll clean it up on his own. 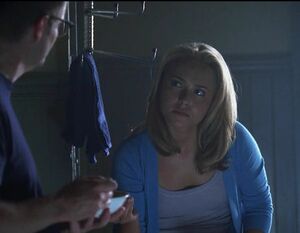 Claire tries to get Noah back on his feet.

Noah wonders why Claire is there and she tries to help him find a new job. He notes that his previous job was a cover and he doesn't have any real-life job experiences. Claire runs him through a mock interview for the job of lumber salesman but it doesn't go well.

Nathan goes to the Houstons' home, where Angela's friend Millie lives. Millie invites him in for a drink and admits that most people don't discuss Kelly with her. She admits that Kelly never came back and notes that Nathan was alone with Kelly on the weekend that she disappeared. Millie admits she hired a private investigator who determined Kelly bought a ticket to London and claimed her baggage. Nathan wonders if something might have happened but Millie admits she wasn't an attentive mother and Kelly was spiteful. She invites him to show himself out but Nathan goes to the pool first. He touches a statue and gets a vision of himself and Kelly sitting by the pool, drinking. She runs over to a bench and invites him to come after her. In the present, Nathan touches the bench and sees Kelly holding Nathan's baseball hat. They struggle for it, then fall into the pool, and Kelly hits her head on the concrete and dies.

Angela meets with Nathan at a bar and says he's digging into the past and upsetting Millie. Nathan tells her what he knows and figures that she's responsible. She finally tells him he doesn't need to remember anything and had the Haitian wipe his memories, and then made it appear that Kelly ran away. Nathan wonders if Angela is going to let Millie continue to think that Kelly ran away because she was a bad mother, and Angela says she does.

Nathan goes to see Millie and tell her the truth. She thinks he's playing a game and tells him to leave.

Claire continues to try and sample-interview her father. He explains that his greatest strength is his loyalty to the company. He admits that looking back on his life, it's been a disappointment. Claire insists he's helped plenty of people but Noah doesn't believe it. She says that he helped her and sometimes you need to remember who you've been to become who you want to be. 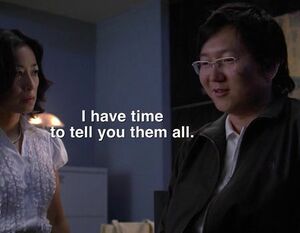 Hiro prepares to reveal everything to his sister.

Hiro returns from the past for the 46th time just after Kimiko tells Ando that Hiro is giving her away. Hiro is exhausted and admits that every time he tries to save Tadashi, he just fails. Ando tells Hiro to accept the truth as Tadashi calls. Hiro immediately tells him he'll be right there and starts to go for the roof. Ando asks what he's going to tell Kimiko, and Hiro just goes to the roof. This time, he sits with Tadashi and explains that he's tried to save Tadashi repeatedly, but he keeps photocopying his butt. Hiro admits it's time to face the truth. He tells Tadashi that he must really hate his job to have photocopied his butt 47 times, and he should find a different job. Hiro explains that life is a gift and he's dying. Finally he tells Tadashi not to keep secrets from those he loves, particularly not family. Hiro gets up and tells Tadashi that he'll always have a friend, and offers his hand. Tadashi bows and thanks him.

Downstairs, Hiro tells Ando that he's right and it's time to tell Kimiko the truth. He goes into her office and says he has many stories to tell her, and hopes he has time to tell them all. Ando watches as they talk and then embrace. Hiro clutches at his head in pain as Ando runs in. Hiro says he's fine but then disappears.

Tracy goes to see Noah at the sushi restaurant beneath his apartment. She tells him she got her old job back with Governor Malden and he wonders why she's there. Tracy insists something is missing and needs to change. Noah suggests she quit if she's not happy, but when she says people would die to do what she does, Noah says that sometimes you have to start over to figure out who you want to be. Tracy smiles and leaves, thanking him for the advice.

Tracy meets with Governor Malden at a bar and tells him that she wants to use the job to set new agendas and makes a real difference in people's life. Malden tells her that she doesn't have to try and impress him, and suggests they go upstairs to celebrate. Tracy goes to the restroom and starts to lose control of her hands, which dissolve into water. A woman comes in and Tracy manages to regain control of herself before the newcomer sees anything. Tracy goes back to Malden and tells him that she's not okay. He says he doesn't understand and she says she wouldn't expect him to, and then walks away. 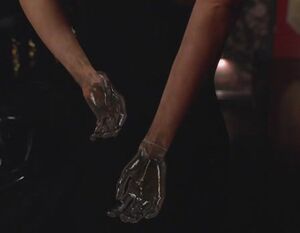 Tracy loses control over her powers.

Nathan pulls into a parking garage and calls the homicide division. They put him on hold and he thinks for a moment, and then hangs up. He gets out of his SUV and a man injects him with a hypodermic, sedating him.

At the carnival, Lydia goes to see Edgar and determine why he's sulking. She wonders if he has concerns about the new people that Samuel is bringing in. Edgar worries that Samuel wouldn't be bringing in so many people if Joseph were still alive. Samuel steps out and insists that he's the one to decide which way the family goes. He says it's time to find more and leads Lydia back to his trailer. He tells her that she can tell him anything, even if she's dissatisfied. He then paints a tattoo on her back, and an image of Noah appears. Samuel is surprised and wonders why Lydia is showing him Noah's face, and insists that he's retired. Lydia says Noah may have changed his mind.

In his apartment, Noah creates a board of articles about the compass, including a a newspaper article with the headline, "The compass that changed the world."

Millie meets with Angela for dinner and tells her what Nathan said about Kelly. Millie explains and Angela apologizes, saying Nathan hasn't been himself recently.

Nathan's abductor drives him out into the forest, dumps him in a hole, shoots him repeatedly, and buries him. The man calls Millie and tells her that "the package has been delivered". Millie tells Angela the call was nothing important and offers a toast, to "closure".

As the killer drives away, Sylar in his real form emerges from the ground.

"'Tell me, Mr. Bennet, what do you think your greatest strength as a salesman is?'"

"Well, if they won't buy from me, I can always just shoot them."

"Every time there's a secret buried someplace, I find you with a shovel behind your back."

"You should write Mother's Day cards."

"Maybe you have to remember who you were to figure out who you want to be."

"Life is a gift, precious and short, not [to be] wasted by jumping off a roof."

"I have so many stories to share with you, Kimiko. I just hope I have time to tell you them all."