From Heroes Wiki
(Redirected from It Takes a Village, Part 3)
Jump to navigation Jump to search 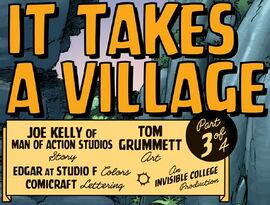 The Haitian and his father trek through the jungle, talking about what happened to their people. The Haitian believes something inside him lashed out and scraped their minds like fingernails. Guillame says that they are both cursed and must make amends.

They arrive at the crossroads. Guillame tells his son that they must rest until dawn. The Haitian asks his father if he hates them, which prompts Guillame to tell the story of the serpent and the crane. The serpent thought the crane was unworthy of his wings, so one day, the serpent swallowed the crane whole, and all of a sudden sprouted wings. The serpent was ecstatic, flying everywhere from the sun to the moon. The Haitian thought it was a good thing that the serpent got what he wanted, but Guillame retorts, "What good is it to fly, if you have nowhere to go?"

Guillame says he is able to drive men to ecstasy and horror when the Loa mount him. He is able to lead nations, but he instead chooses to make the men euphoric and sleep with their women. That night, The Haitian dreams of a snake with no teeth and a crane with a broken neck.

When the sun rises, Guillame and The Haitian trek up to an opening in the mountain, surrounded by skulls and an axe. The Haitian questions what they are to do there, but Guillame ignores him and tells his son to take his machete. The Haitian asks what is going on, but his father, in a trancelike state, kicks his son away. Guillame compares himself to the serpent, saying how he was blessed with the powers of the Loa, but he forgot where he came from. His curse was his son, who took his powers away. Guillame then lunges toward his son in a terrible rage, screaming that he will fly again.