From Heroes Wiki
(Redirected from Spoiler:Donna Dunlap)
Jump to navigation Jump to search

Donna Dunlap was an ordinary civilian forcibly conscripted into becoming an agent for the Company after being captured by Elle Bishop. She was an evolved human with the ability to see great distances.

Donna goes on a date with Blake, a man she met on the internet, at Samsher's Palace. Suddenly, she receives a phone call from evsdropr, who advises her to abandon her date. The mysterious informant also instructs her to retrieve a gun from under the table, which she does.

That night, Donna returns to her home and notices Blake spying on her from half a block away. Using her enhanced vision, she grabs her gun and shoots Blake in his night vision goggles. Donna, afraid of what she has done, tries to drive to her parents' house, but runs into Blake's partner, Elle. She is zapped by Elle, which knocks her out.

After being electrocuted by Elle, Donna wakes in the Company's infirmary next to Noah Bennet who warns her to refuse any offers from the Company. When Bob finds out that Noah had been talking to Donna, he asks the Haitian to modify Donna's memory so she'll forget ever meeting Noah. Unfortunately for the Company, evsdropr catches all of this on surveillance and shows Donna, who then agrees to help him bring the Company down.

Donna is sparring with Felicia to prepare for her upcoming first mission. Afterwards, Donna agrees to go shopping with Felicia. After returning, Donna is called into the office of Gael Cruz. Donna learns from Gael that she has been pulled from all missions and combat exercises, but does not explain why. Thinking she is about to be fired, Donna fears that the Company knows she is a double agent. She tries to get a look at her file in the file room, only to be caught by Thompson, Jr., who is reading it. After informing Thompson of her situation, she snatches her file from Thompson and glances at it before he can stop her. In her file, Donna sees a prophetic painting by Isaac Mendez of her death and reacts in disbelief until Thompson explains it.

Donna walks into a Company file room and sees Thompson, Jr. looking at her file. She snatches it and looks at the photo of the painting of her own bloodied body.

Thompson, Jr. takes Donna to see Noah Bennet and informs her Noah killed his father. When Thompson, Jr. steps away, Noah talks to her and Donna pretends not to know him. Later, Evsdropr phones Donna and tries to keep her focused on taking down the Company, but Donna throws her cell phone away.

Donna is assigned to internal affairs at the Company and investigates Leonard Cushing's murder. She talks to everyone involved, visits a research library to examine some negative film and talks to a medical examiner who is autopsying Cushing's body.

Later, Donna finds her cell phone and a brown paper bag on her desk. The bag appears to be from Evsdropr and contains a bullet in a sealed plastic bag Donna thinks may be the missing bullet that killed Cushing. Donna has the bullet tested. The Company's lab does analysis and tells her that it matches Cushing's blood and unique acid signature, and ballistics says that the bullet was shot from Thompson, Jr.'s gun.

Donna then confronts Thompson, Jr. with the evidence. As Thompson, Jr. then reaches into a drawer, Donna reaches for her gun inside her vest. But instead of a gun, Thompson, Jr. pulls out his own bagged bullet and explains to Donna how Evsdropr tricked him and two other agents into murdering Cushing. He then gets Donna placed back on active duty as his partner. Afterwards, Donna calls Evsdropr and says that she's handling things her own way now.

Outside an Antarctic base, Donna and Thompson, Jr. prepare to participate in a coordinated bag and tag mission. Donna spots their target through a window, and they radio in that they are ready. When "Julien" gives the word to go, she supports Thompson, Jr. as he kicks down the door, then draws her gun.

Donna and her partner, Thompson Jr., give chase to Sabine and the root Julien in Primatech Research. They arrive together at the Company parking garage, and mistakenly shoot at a decoy clone while Sabine and Julien escape the building in an SUV. Donna then rides with her partner, giving chase by car. When they eventually get close enough, Donna aims for a tire on the fleeing SUV and shoots it, sending Julien and Sabine off the edge of a bridge that crosses the Bronx River.

Donna and her partner, Thompson, Jr. track down a Company target to bag and tag him, with the help of a Company support team. Seeing high levels of rare plant growth, Thompson, Jr. suspects the culprit to be an evolved human by the name of Lewis. Donna has doubts over whether Lewis has yet reached these power levels, but Thompson, Jr. informs her that his father suspected Lewis's ability might mutate after the last time the Company captured him. Thompson, Jr. instructs Fallon, leader of the support team, to safeguard their extraction point, adding that they should not interact with any vegetation. Now away from Donna and Thompson, Jr., Drake refers to the two as "just a couple of kids who don't know what's what." Seeing a sudden explosion, the team rush to Thompson., Jr. and Donna's extraction point, where the two lie motionless on the floor, with Lewis standing over them.

After failing to capture Sabine and Julien, Donna and Thompson, Jr. return to Primatech Research only to find Gael and Bianca waiting for them. Convinced Donna is working for evsdropr after finding Donna's phone, Gael brings her to an interrogation room and tries to get information from her, even going so far as to aim a gun at her head. He reminds Donna of things that happened recently: her first agreement with evsdropr to take down the Company, Cushing's remark about how evsdropr is "always watching," and how Donna wasn't able to stop Sabine and Julien even when she had Sabine's head in her sights.

Bianca tells Gael that Donna didn't have access to the file room, but Thompson, Jr. breaks her confidentiality and says she managed to get in there. Bianca becomes frustrated with Gael's rising anger and pulls him and Thompson, Jr. out of the room. As a confrontation between the humans and evolved humans takes place outside the interrogation room, Donna, still tied to her chair, thinks to herself that perhaps this is what evsdropr has wanted all along.

After Thompson ends the fight by releasing gas in the air, Bianca unties Donna from her chair and sends her to a motel. Later on, Thompson pays her a visit. Donna emerges from the bathroom just as Thompson breaks into the room. They talk about Thompson's reputation with women at the Company and Donna warns him that he isn't going to use her to further his reputation. Donna says that the only way she can stay with the Company is to clear her name and turn in Evs Dropper. Donna continues speaking with Thompson until there is a thud heard from the bathroom.

It is discovered that Penny has been altered to look like Donna, and that she knocked out Donna in the hotel bathroom and deceived Thompson, Jr. Meanwhile, Donna has been tied up on a bridge near some explosives, and they are 3 minutes away from exploding. Thompson runs over and begins to untie her, but her feet are nailed to a piece of wood. Donna tells him to leave her to die, and he tells her that he loves her. As he jumps off the bridge, she whispers that she loves him too, then dies in the explosion.

evsdropr posted the transcript of a chat between Blake and Donna in which they flirt and arrange a date at Samsher's Palace. 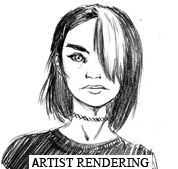 An artist's rendering of Donna appears in her case file. 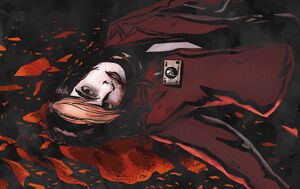 This Isaac Mendez painting of Donna is also included.

Dunlap lived a seemingly "normal" childhood; her parents are happily married, she attended school through the university level (emphasis in pre-health studies), and she has a clean criminal record. Dunlap's telescopic vision allows her to view objects not typically visible with the naked eye with incredible clarity. Her impressive academic performance can be attributed to her amazing attention to detail and strong levels of concentration. Dunlap is finishing up training at the Company facility and will be given mission objectives when deemed appropriate.

Company findings indicate that Dunlap has the tendency to lack motivation when not properly monitored. She is not technologically inclined; her abilities with computers and high tech machinery are elementary. Dunlap has a strong sense of right and wrong; in the event of a morally compromising mission, she may not be the appropriate choice. We have yet to see the full potential of her powers and there are aspects of Dunlap that are still enigmatic. 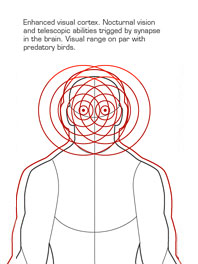 Donna had the ability to see clearly from great distances, even in the dark. As a child, she used her ability to read under the covers without a light. In school, she was able to see things written on a teacher's desk while sitting in the back row. It is unknown exactly how far she could see, but she was able to see "Blake" from half a block, at a distance of 245 meters (804 feet) and shoot him squarely in his night vision goggles.

In Career Choices, Felicia refers to Donna's ability as "X-ray vision" though it is unclear if Donna could actually see through opaque objects.

According to her assignment tracker file at primatechpaper.com, Donna's control index was 45%. Her data analysis shows her biological level was at 65, cerebral at 55, elemental at 30, and temporal/spatial at 15.