There's a decent capture of Sylar using his original ability on Brian here if you need one.

Nothing worth going in the main article, yet, but Sylar's statement to Bennet (quoted in the article) implies that he can intuitively analyze human behavior, not just physical systems. --Ted C 12:02, 4 January 2007 (EST)

How do we mention examples of Sylar's power from Distractions? — RyanGibsonStewart (talk) 02:31, 6 February 2007 (EST)

So Sylar's power is pretty much in constant use, I'm assuming. This is a different power, one which is hard to chronicle examples. Any thoughts on how we document this power? — RyanGibsonStewart (talk) 12:59, 6 March 2007 (EST)

I wonder if Sylar's intuitive aptitude helps him solve problems like "how to fight an invisible adversary". When Peter disappeared in .07%, Sylar came up with an effective counter tactic using available resources very quickly. --Ted C 17:42, 25 April 2007 (EDT)

I don't see how Sylar's comment about seeing how something works is an example since he didn't steal his ability.

On a side note, shouldn't every power theft be an example of this ability? We don't know the mechanics of how he steals abilities, but it's derived from his intuitive aptitude? --Bob 03:22, 18 May 2007 (EDT)

According to the most recent CBR interview, they haven't revelead what Sylar's original power was. Are the writers on crack or something :) --Heroe!(talk) (contribs) 19:57, 31 May 2007 (EDT)

I'm beginning to wonder if intuitive aptitude might not be Sylar's "original ability" after all. Given that he also apparently has the same power as Peter (empathic mimicry), I think he acquired the "intuitive aptitude" from someone else without realizing it, the way Peter's precognitive dreaming occurred all through Season One without being explained until Season Three. It's most likely that Gabriel's adoptive mother or father had it -- and of the two I'd guess his father since he was a great watch-fixer too.--Cosmic AC 22:40, 19 November 2008 (EST)

The following is a comment on Telekinesis: "Sylar has demonstrated far more advanced telekinetic abilities than Brian, probably because Sylar has actively developed the power." (emphasis added) While his practice with using his first acquired power has certainly increased his proficiency, I submit that the whole "knows how things work" aspect of his innate power is what makes Sylar so scary. (Next to his proclivity to exencephalate people.) Not only does his intuitive aptitude give him the ability to acquire others' powers, it helps him understand how to use and control them quickly. For a further example, I refer the interested reader to how quickly he was able to start painting the future and make and control the radioactive puff-balls after scooping out Sprage's brain, while Ted himself and Peter seemed to have some issues. -- FissionChips 23:28, 3 October 2007 (EDT)

Sylar seems to be limited by his recent injuries. Although he attempted to take a new power, it is not clear whether or not he will be able to utilize the new power once he heals. Did he fail to take on the new power, or is he simply hampered from using it while injured? --Wolfeman 18:59, 31 October 2007 (EDT)

The current definition of Sylar's ability is: "..to analyze complex systems and intuitively understand how they work without special education or training." The question is, does Sylar's ability of Intuitive aptitude allow him to analyze/examine complex systems, or does it allow him to intuitively understand/grasp complex systems without having to analyze them?. Analyzing refers to a logic process (i.e. the detailed examination of the elements or structure of something), while intuition can be defined as a form of instinctive knowing or direct cognition without the use of reasoning processes. Any thoughts? Siddhi Powers 00:07, 1 February 2008 (EST)

Take for instance the definition of "intuition", as given on Wikipedia:

"Intuition ..[is] usually connected to the meaning "ability to sense or know immediately without reasoning," and is often regarded as a divine or prophetic power...

Now, consider the definition given for "analysis":

"Analysis (from Greek ἀνάλυσις, "a breaking up") is the process of breaking a complex topic or substance into smaller parts to gain a better understanding of it. The technique has been applied in the study of mathematics and logic since before Aristotle, though analysis as a formal concept is a relatively recent development...." - wikipedia

Here we can see that the conflict arises because the terms "intuition" and "analysis" have essentially two completely different meanings. Namely, "intuition" means, "to know something immediately without reason or previous experience". While "analysis" means, "to examine, break up into smaller bits, pull apart, dissect". Therefore, I would suggest that the meaning for "Intuitive aptitude" be switched up for something more in along the lines of the following examples:

One other point though that I think is worth mentioning is that although Sylar's ability may not require the use of reason or previous experience during its application, it is still possible that the ability is initially developed through first learning how to analyze system dynamics and the interrelationship between parts of a whole. However, once the fundamental aspect of the ability has been developed, it can then be applied to anything.

Down at the bottom it has that Sylar had books on Brain examination in season 1 when Mohinder and Eden enter Sylar appartment so he would of studied on the brain, it is only watches that he did not read about. 50000JH

When did Peter obtain the ability

When did Peter absorb it??

If Peter had the ability all along, he wouldn't have needed to stay in the future to confront Sylar about getting it from him. Duh. TheEvilNoob 19:55, 11 October 2008 (EDT)

"I went to the future, and I took your ability." The thing is Peter did NOT take it, that requires forcibly making Gabriel do something he didn't want to do. Gabriel willingly showed Peter how the power worked. Peter had it all along. --Snow Leapord 13:43, 22 October 2008 (EDT)

Since the original picture of Sylar holding his watch to his ear is pretty vague, (but also about all we had until this point); shouldn't we change the pic for this power to be this new one: 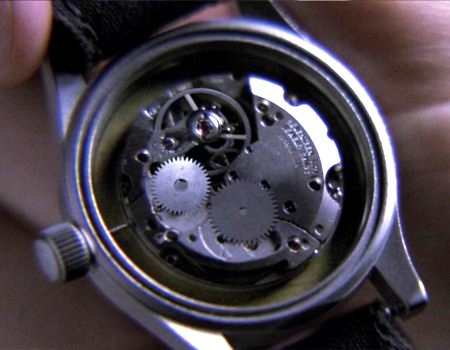 Time and Method of Absorbtion

Near the bottom of the "Talk:Peter Petrelli" page, I wrote a long explanation of how IA was clearly only absorbed in IABD, then realized that it applies to this page as well. In addition, there should really some mention of how this ability is able to be absorbed/manifested/used, since Peter was unable to until Sylar helped him fix the watch and start using the power. Darmenos 21:40, 9 October 2008 (EDT)

My fellow peeps of the heroes wiki, we have always gone by the golden rule that "canon comes first." I say we follow this here too, and use Peter's quote "I went into the future, and I took your ability." If Peter absorbed it he wouldn't have needed to go to the future my friends TheEvilNoob 20:54, 19 October 2008 (EDT)

What you are saying seems more like an interpretation rather than straight facts. Right now Peter's quote is the most reliable source right now and it should be used until the story is unfolded more. And Sylar never said that it was called the Hunger. He said with the power comes a "hunger" to learn more and more. And of all things why didn't Future Peter learn it himself?--Guy in a floppy green cap 01:58, 2 November 2008 (EST)

FPeter said so himself he made mistakes. He wanted Peter to avoid those mistakes and to do so he needed to put the big picture together using IA. --Snow Leapord 11:53, 2 November 2008 (EST)

Does Arthur have this ability?

I very much think that he does as he said he absorbed all of Peter's abilities. I always knew that Peter had to lose this ability. I doubt Arthur would have to use it anyway and i'm sure he would be able to control it subconsciously as he was able to use Peter's lightning seconds after absorbing it.--ACDC1989 07:04, 22 October 2008 (EDT) 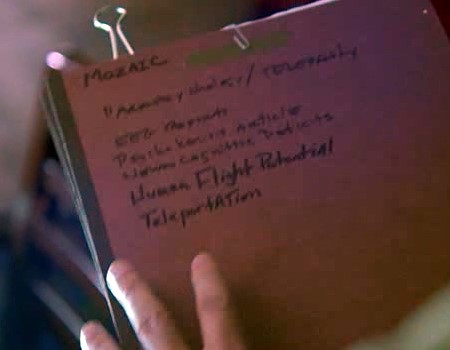 But as shown, abilities can evolve, and Sylar has shown that he can access the ability the way Peter does. Which means he probably could take abilities like Arthur does as well (with practice). --Powermimic 01:25, 18 November 2008 (EST)

On a side note: “In a previous BTE interview, it was stated we would see in ‘Villains’ why Sylar was able to keep his telepathy despite being infected with the Shanti virus. However, we didn't seem to get any explanation last night. The only conclusion I can deduce is that it's all in his head, and somehow related to the extreme amount of guilt he felt over Brian.”

Kyle, we assume you mean telekenisis, and not telepathy and if so, you nailed it. Brian was Sylar’s first kill and his power is connected to emotional empathy. In fact, we’ll be exploring that very sentiment tonight. In chains. With electricity. --Riddler 07:56, 18 November 2008 (EST)

Due to recent events in the series, I have brought up a proposal (relating to this page) at Talk:Mimicry, if folks could take a look at that. Ricard Desi 16:19, 25 November 2008 (EST)