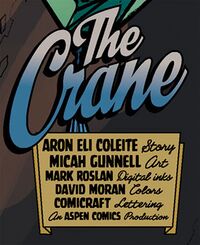 After the explosion (Don't Look Back), Hiro Nakamura teleports back to the train in Tokyo and immediately rushes back to his apartment. He tears the cover off his copy of Action Comics, Issue #1, the DC Comics comic book in which Superman debuted. Hiro folds it into an origami crane and takes it to a park to speak with his grandfather. Sitting down on a park bench next to an old man, Hiro reveals that he is named in memory of the Hiroshima bomb from which his grandfather survived. The old man gets up and walks away—he's not Hiro's grandfather after all. Hiro is at the Hiroshima Peace Memorial, his grandfather is dead from cancer, and his crane is placed among thousands of others. Hiro discards his Yamagato Industries employee badge, and says he has done a disservice to his grandfather's memory, but won't let it happen again.