Catalyst is a user of this wiki.

Hey! My name is Catalyst. I am 15 years old and of course have an great interest in heroes.

I've been a fan of heroes for a long time. I had a late start watching it. The first episode I saw was .07% then Five Years Gone. I wasn't to sure about Heroes When I saw it first. But when I saw Five Years Gone, I had to watch it from the beginning. So I rented it on DVD. I hope to be a newspaper photographer, for I love taking pictures. I have been told that I a good at it and should keep it up. So I will take their advice and try to pursue what I want to do. I am also involved in Shotokan Karate, and will hopefully be able to achieve my next belt.

A Bit About Me

My all time favorite characters in the show are Peter and Sylar. Their character personalities are great, and the two actors play them perfectly. I also love that they are the ones who can have multiple abilities. And for the record, I don't like them because they are the most powerful (though has something to do with it), but the fact that because of them, we see more abilities, and we get to see them stay in the show if some characters die or even just leave. My favorite ability on the show...I guess it would be a tie between Telekinesis, and Invisibility. The ability to grab anything without moving, and able to sneak up on people or anything for that matter. I have made many fan creation which you can see below, in my navbar. My favorite episode is Five Years Gone. Like I said above, it is the episode that got me into Heroes. It will always be my favorite out of all of them. I have theories about the show, which you can see here. Hope some agree with a few of them, and if you do and also have another good reason, feel free to add the new reason to the page. I am working on a project. I have called it Heroes Legends. It is a story that I am writing myself, about a few character and their adventures after the eclipse.

I was invited to be part of the team of Cockney Heroes, along with Irony, LDB, Gabriel Bishop, Leckie, Radicell and Danko. I did my jobs to contribute and my character was able to make an appearance. However I have left the series, for certain reasons. I will always be grateful that they wanted me to be apart of the team and I thank each and every one of them, for the chance to be in Cockney Heroes. 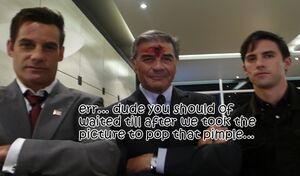 I thought this season was fantastic. Though all first seasons of every show are the best, but still. The plot to the story was great and different from most superhero shows/movies you might see. I was a bit of a fan of Zach. He was a funny character, and was there so Claire could share her secret with. I thought that was cool.

When this season started up, I was a little bummed that he was was not going to be seeing Peter Petrelli or Sylar any more. But what a surprise it was at the end of the premiere and the next few episodes. I had read a lot on this site and other places that not everyone liked this season. But I liked it a lot. At first I didn't really like West all that much. But after a few times I saw him in some episodes, I grew to like him a bit more. Though it was disappointed due to the shortness of the series, for the writer's strike had stopped it. It was a shame because I would have liked to see more episodes lead up to the finale. I personally thought it had a good story.

I thought that this season was good, but didn't have the same feel to Heroes as seasons 1 & 2. I didn't lose interest at all, I thought everything was really cool, but just missed the simple one or two story lines of the season. But one thing I liked was the writers bringing in Arthur Petrelli into the show. I felt he was a really cool villain for the series and was a little sorry to see him go. I hate the fact that Elle died. She was my favorite female character. I am going to miss all of Peter's powers, but did think he was too powerful, and it went to his head. Although, I would have liked to see Peter get maybe, three abilities back at most. His ability now had been growing on me more and more. It gives Peter some vulnerability.

Now the end of Volume 3, the time when I first got my Heroes Wiki account.

Volume 4 was pretty good. i feel Danko was a good addition to the show. But I i'm not so sure if I liked the Sylar/Danko team up or not. It was cool to see John Glover as Samson Gray, especially me being a Smallville fan. I have hopes we see more of him. Maybe he will eventually show up again.

Even though I was glad to see Sylar get his powers back in season two, he is getting a lot of abilities really quickly, like Peter did. His previous acquired ability is Shape-Shifting. I do not like this at all because only Zachary Quinto can portray Sylar, and everybody is playing him. If he keeps this up, Zachary Quinto will never be Sylar again. And of course there always has to be a lie, concerning Noah. Stupid move on his and Angela's part with the whole Sylar --> Nathan deal. That will definitely come back to bite them in the @$$.

The harder you work now, the less harder you'll have to work when you're older.

MONKEY CLAW, TIGER BALL, PUT TOGETHER, YOU GOT BIG PROBLEM !

- My Father to Me