Matt Parkman wakes up in a bed in some kind of medical lab. Mr. Bennet walks in. Matt's confused and thinks he's at a hospital initially or that it's part of some FBI or CIA operation, but Mr. Bennet tells him that's he not part of any organization that has initials. It soon becomes apparent to him that he's in some kind of danger. Mr. Bennet had Matt drugged at the bar the previous night. Mr. Bennet knows of Matt's powers and, glancing at a brainwave readout, muses that Matt is trying to read his thoughts. However, The Haitian, the man whose thoughts Matt couldn't hear at the bar the previous night, appears to have some power that hinders telepathy, and keeps Mr. Bennet safe. Nevertheless, Matt is able to read at least one of Mr. Bennet's thoughts — he asks his captor who Claire is. Mr. Bennet muses that Matt is farther along than they thought. He asks the man from the bar to erase his memories of what happened, saying "go deep and clean him out".

Hiro and Ando arrive in Las Vegas, and Hiro is trying to figure out how to say "you are going to die in five weeks and New York is going to explode" in English so that Isaac will understand him. Ando tells him how to say it and offers to teach him how to say it phonetically. Ando's attention is quickly caught by the Montecito Casino and he wants to do some gambling.

Niki and Micah are at the same casino and are escorted upstairs to visit Miss Sakamoto, Mr. Linderman's assistant, concerning the money Niki owes Linderman. She's told that he will forgive her debt if she does a "favor" for him. There's a politician from New York arriving and he wants Niki to keep him distracted.

A medical examiner is performing an autopsy on Claire. Apparently she had been dumped naked in the river after having been killed the night before. The mortician removes the branch from her skull and the wound begins to heal. Before Claire regains consciousness, the mortician leaves the room to answer a phone call. Claire wakes up, adjusts her skin so it will heal, steals a lab coat, and manages to sneak out of the morgue.

Claire returns home and sneaks inside.

Nathan gets into a car as Mohinder runs up and tries to talk to him. He tells Nathan that his name is Dr. Suresh and that his life is in danger. He mentions Sylar and asks if Nathan may have developed any strange powers. Nathan refuses to speak with Mohinder and leaves.

Peter wakes up in bed with Simone. His doorbell rings and Nathan is at the door. He accuses Peter of talking to Dr. Suresh and sending him after him. Nathan offers Peter some money under the guise of helping him out, but Peter refuses it. Peter and Simone subsequently discuss the status of their relationship with Simone telling him that she needs some time before jumping into another relationship. 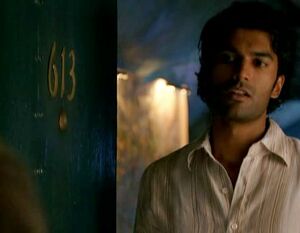 At home, Claire gets cleaned up and heads downstairs for breakfast. Unfortunately she forgets to wash her feet which her father notices. He suspects she has been out all night with the quarterback and scolds her. He tells her he's disappointed in her, that he loves her, and that she can tell him anything. Claire doesn't know that her father has already seen the tape. He tells her there's going to be "a throwdown" when he gets home from work.

Back at his apartment, Mohinder berates himself for attempting to warn Nathan. Eden comes in, bringing Chandra's ashes. Just as Mohinder decides to head home to India, Peter arrives, looking for Chandra and claiming that he has abilities.

Eventually Hiro catches up with Ando to find he's lost all but one dollar of their money. The last dollar is bet on a game of roulette, 26 black. Hiro tries to withdraw the bet, but the roulette dealer stops him. Hiro stops time and places the ball so that Ando will win. While he has time frozen, he also saves a glass that was in the process of being tipped over as someone bumped into a nearby waitress. Hiro expresses guilt in having used his powers to for monetary gain, but Ando compares it to Peter Parker (of Spider-Man) selling photos of Spider-Man for money, and Hiro seems to concede. 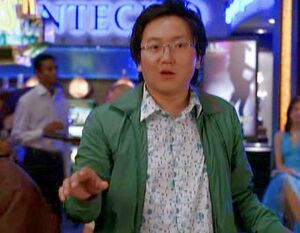 Hiro helps his friend in gambling.

Tina helps Niki get ready to seduce the politician. Micah tells Niki that he knows about her webcam business, and prefers it to what she's planning to do because it's safer.

Mohinder is skeptical of Peter when he claims that his power is the mimicry of others, citing his flying with Nathan and his drawing of the future after meeting Isaac as examples. He offers to take Mohinder to meet Isaac and try to make his power work.

Simone arrives at Isaac's apartment to take some of his paintings and sell them, so he'll have money to enter rehab. He refuses to let her take any of his prophetic paintings, claiming he needs them to stop the explosion.

At school, Zach tries to convince Claire to tell someone about what Brody did last night, but she refuses. She has no marks on her and no one would believe her. Brody sees Claire, panics, and runs off.

Hiro uses his power to manipulate Ando's cards while he plays poker, swapping his poor hand with his opponent's flush and winning.

Nathan arrives in Las Vegas and ends up literally bumping into Niki. They start to hit it off and eventually end up in Nathan's room talking.

Peter and Mohinder take the subway to Isaac's apartment, but Isaac doesn't answer his door: he's high on heroin and his eyes are glazed over as he's painting a picture of Claire running from a large black being.

Claire is approached by another girl, Lori, who asks what happened between her and Brody last night. Claire finds out that she's not the first woman Brody has tried to take advantage of. When Claire sees Brody being aggressive with another girl, she grows fearful that Brody won't stop. 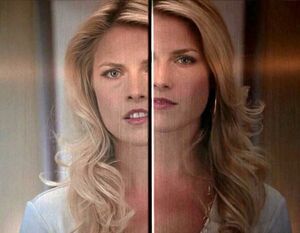 Hiro and Ando ride down an escalator in matching suits. At the bottom of the escalators they're met by men who throw them out of the casino and into the waiting arms of some thugs they cheated in poker. Ando, speaking in English, claims that Hiro has super powers and can defeat them all. Hiro, not understanding English, stands there smiling. One of the thugs punches Hiro in the face knocking him to the ground leaving Ando alone and scared.

In Nathan's hotel room, he and Niki share champagne as they look out across the city. Nathan wonders out loud what it would be like to fly over the desert, not in a plane, but to really fly over it. While talking, Niki tells Nathan that her husband is a criminal and ran off and that she has a son, Micah. Nathan tells Niki that he's got a wife and kids. Nathan kisses her, but she tells him she "can't" and she ends up amicably leaving.

As Niki is waiting for the elevator she sees her reflection in the elevator door; half of it is normal, the other half is acting of its own accord. When the doors open one of Mr. Linderman's thugs grabs her and assaults her for not doing what she was sent there to do. He threatens her and her son if she doesn't go back. Suddenly Niki tells him, "Niki's not here anymore" and attacks the thug. As the elevator doors open the thug is knocked to the ground. Niki places her heel over the side of his head and tells him that if she threatens her or her son again, she'll put her heel through his skull.

Niki's alternate personality still in control, she heads back to Nathan's room. She strips down for him, revealing the symbol on her right shoulder blade.

On the subway, Peter and Mohinder talk about super powers on the way back from Isaac's when suddenly time crawls to a stop. 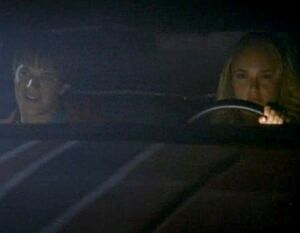 Claire sits on the same bleachers that she appears to be running up in Isaac's vision waiting for Brody. She asks him for a ride home, but asks if she can drive. She drives at high speeds while confronting Brody about what happened the previous night. Brody claims no one will believe her and accuses her of getting drunk and coming onto him. When he claims there's nothing she can do about it, she crashes the car into a wall at high speed.

Mr. Bennet approaches Niki and Nathan asleep in the same bed and tells The Haitian to "just take the one."

On the subway, time seems frozen. Peter, however, appears to be unaffected. He wanders the train for a bit in confusion. Eventually an unknown Japanese man can be seen in the back of the subway car. He approaches Peter and in well-spoken English informs Peter that his name is Hiro Nakamura and he is from the future. Hiro says he did not recognize Peter "without his scar". He tells Peter he has a message for him.

"Your life may be in danger. I believe someone is targeting you."

"Can you be a little bit more specific? Twelve percent of the electorate strongly opposes me."

(she laughs) "I would take that one too."

"My friend, have very big power! He take you all out; make you wish you never been born!"

- Ando (to the high roller's thugs)