Caitlin was a woman living in Cork, Ireland with her brother, Ricky. She ran the family pub with him and became the love interest of Peter Petrelli. 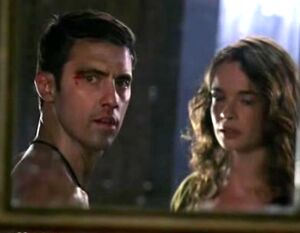 Caitlin tends to a man who can heal his own wounds.

Caitlin cleans the blood off Peter while talking to him about the iPod job her brother was supposed to do. She asks Peter if he really doesn't remember his name, but he confirms his amnesia. After washing away the blood, Caitlin notes that Peter had a lot of blood, but no cuts on his body.

Later, Ricky leaves the Wandering Rocks and asks Caitlin to watch after Peter. McSorley's son and another man come into the pub. Caitlin tells them that Ricky just left, but they tell her that they're not there to see Ricky. Realizing she's alone, she reaches for a gun, but is held down by McSorley's son. Peter rescues her from the thugs.

Peter gives Caitlin ice to put on her arm. She asks him how he did the things to the two men, but he tells her that he didn't do anything. Ricky comes in, then threatens Peter with a gun after Peter gives him a smart remark. Caitlin tells Ricky to calm down.

Caitlin looks on as Ricky makes a deal to Peter to get his identity back. As Peter tries to summon sparks and lightning, Caitlin wonders if that is how he recalls it, but he tells her that he feels helpless. She tries to comfort him, and tells Peter that she has his back. When he asks why he should trust her, Caitlin replies that she hasn't told anyone about his abilities.

Caitlin waits in the car as Peter runs up to Pinky's Sportsbook. After Ricky, Will and Tuko rob the sports book, Peter runs to the car, and Caitlin drives away.

At the Wandering Rocks, Caitlin, Ricky and Will celebrate the pull from the job, and Will pulls a gun on Ricky. Peter comes in to comment that he was right about Will, and Will shoots Peter. Caitlin looks on in horror, and Will aims his gun at Caitlin and Ricky when Will is thrown back against a wall by Peter, who suddenly heals from the gunshot wounds. Caitlin looks on, and realizes Peter is choking Will. She yells for him to stop, and Peter drops Will.

Later, Caitlin gives Peter a tattoo, and Ricky welcomes Peter to the family. He gives Peter his box, and Caitlin shows excitement in finding out who he is. Peter worries that he might not like the life in the box, and Caitlin tells him if he likes who and where he is now, then he should hold off on looking in the box. The two kiss as Peter's tattoo fades away.

Caitlin and Peter walk the beach in Ireland. He is preoccupied in trying to call out electricity, but is having no success. She tells him of the love-story of a mermaid and the Irish hero Cúchulainn, and how the mermaid told him to call on her name in battle, and he would receive her power. Peter, inspired by the story, calls on Caitlin's name, and electricity easily flows at his command, surrounding her in its arcs, but doing no harm to her.

Caitlin closes the Wandering Rocks in the middle of the afternoon and kisses Peter passionately. She tells him that he can't just forget his past, and Peter tells her that he doesn't want to dig deep because of what he's capable of. Peter asks why she's asking him to look when she told him otherwise, but she tells him that was because he hadn't kissed her yet. Later, Ricky walks in on Peter and Caitlin kissing, and tells Peter that he needs to speak to him. Caitlin washes the bar as the two talk.

Caitlin walks into her flat with Peter, where he finds a few canvases that Caitlin painted. Peter pulls out the box, and tells Caitlin that he has to face who he was. He explains that he wants to be with her, no matter what's in the box. He finds a plane ticket to Montreal, his passport, some money, and a photo of himself with Nathan, though he doesn't recognize him. Peter looks towards the canvases, and picks up a paintbrush. His eyes turn white, and he begins to paint. Caitlin stares in shock as Peter paints. Peter finishes the painting and asks what happened. He doesn't realize he painted the painting, and Caitlin explains that his eyes went white. He sees the street signs in the picture are in French, and Caitlin wonders if they need to go to Montreal. She receives a phone call and the two rush to the pub. Tuko sits next to Ricky's burned body, and Caitlin tries to run to her brother. She cries, and Peter apologizes to Caitlin. He tells her that they came after him, it's his fault, and that he can't hide anymore.

At the scene of Ricky's murder, Caitlin looks at an old picture of her brother. Peter apologizes for the incident, as the killer was looking for him, and he shouldn't have let Ricky cover for him. He states that he will not risk Caitlin's life, and that he has to go to Montreal. She insists on going with him, since she is pictured in the painting with him. Peter asks why she has to go with him, and she says she wants to find her brother's killer and "kill the bitch". Together, Peter and Caitlin enter the Montreal building depicted, find a note, and suddenly find themselves in a deserted Times Square in the future. 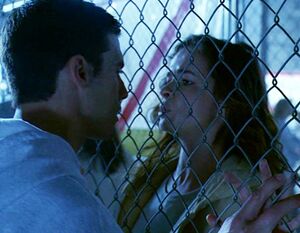 Caitlin gets left in a horrible future.

Caitlin and Peter search for people in New York, and are ambushed by a HazMat team. Both are forced to shower in a quarantine room, and decontaminated. Peter is told that Caitlin will be deported back to Ireland, and, after seeing her in a line of people supposedly about to be deported, Peter tries and fails to teleport them both back to the present, accidentally leaving her behind.

In a vision of 2008, Peter sees himself and Caitlin being captured by the CDC agents.

Please refer to Theory:Caitlin for fan-created theories and other speculation.