Yaeko is the daughter of a swordsmith.

Yaeko appears as Hiro and Takezo Kensei are talking and slaps the swordsman across the face. She begins to berate Kensei for drinking sake while their homes were burned and her father is kidnapped. Ignoring Kensei's attempt to put the blame on Hiro she then takes back the sword. Both Hiro and Kensei claim ownership of the sword. She then states that it is her father's sword, as he is the one who forged it. After taking the sword, she walks away, only to be stopped by Hiro who asks her where she is going. She replies that someone must save her father and that if Kensei will not, she will.

Hiro, garbed as Takezo Kensei, rides into a clearing to find Yaeko using her father's sword to defend herself against a number of swordsmen. The leader tells Yaeko that he needs her father, not her. Hiro disarms the men as a grateful Yaeko watches.

After some time, Yaeko apologizes to Hiro for thinking that Takezo had just left with their money. She praises his honor and bravery. They enter a clearing filled, and Yaeko comments on the beauty of the cherry blossoms; she finds it odd that the tree is beautiful, but bears no fruit. She asks Hiro to take off his mask but he declines, saying that she "disarms him" and that his love for her will be legendary. She closes her eyes, and when she opens them, Hiro and Kensei's horse have disappeared, leaving Yaeko standing alone in the falling cherry blossoms.

Later, Yaeko enters the room where Hiro and Takezo converse, and tells the real Kensei that he forgot his sword. She tells him that they must go rescue her father. As they leave, Whitebeard's men attack Kensei.

Yaeko and Hiro walk together, and Yaeko wonders where Kensei went. Hiro tells her that he did not run away, and finds him cutting his arm.

After Hiro brings Kensei to the Hidden Fortress, Yaeko wonders if he'll ever return, but Hiro assures her that he will. She wonders if he's been kidnapped or killed, but Hiro tells her that he can't, because Kensei knows that Yaeko is waiting for him. She tells Hiro that at times, it seems like Kensei is two men: a brute and a gentleman. Suddenly, Kensei appears with the fire scroll. Yaeko runs to him, and the two embrace and kiss.

Later, Hiro tries to leave, and Yaeko tells him that he is a good friend. As Yaeko and Kensei walk away, Kensei makes cherry blossom petals fall on her, which makes Hiro not want to leave just yet.

Kensei and Hiro run up to Yaeko with another fragment of the tapestry to find Whitebeard's camp and help find Yaeko's father. Yaeko insists that they follow in battle, and the three see how massive Whitebeard's army is.

The day before they invade Whitebeard's camp, Hiro asks Yaeko not to go into battle, but she insists that when she is with Kensei, she cannot be harmed. She wonders where they will find her father, and Hiro recalls the tale that Kensei found him in the tent that smolders. She insists that they cannot guess when Kensei arrives, telling her that her father is in the smoldering tent. Yaeko shoots Hiro a look, and he tells the couple that they should begin to get ready.

Hiro, Kensei and Yaeko approach Whitebeard's camp to find the swordsmith. Kensei walks up to a guard, who stabs him. Kensei seems unaffected, pulling the sword out and knocking the guard out. The three run into the tent to find Yaeko's father. Hiro introduces himself and Kensei. The swordsmith asks if he is a drunk, but Kensei tells him he is now a hero. They try to remove the chains holding the swordsmith in place, but he tells them they must not, because he needs to destroy Whitebeard's guns. Hiro asks where he was able to get guns since the emperor banned them, but the swordsmith tells Hiro that he showed Whitebeard how to make them in exchange for Yaeko's safety. He explains that Whitebeard intends on overthrowing the emperor, and Hiro remarks that Kensei must save Japan by destroying the guns. Kensei nods and begins to hack at the chains.

At Whitebeard's camp, Hiro, Yaeko, Kensei and the swordsmith run away, with Kensei killing many men in their way. Guards alert of the attack, and Whitebeard fires a rifle towards the invading party. The bullet nearly hits Hiro or Yaeko, but Hiro teleports the two to safety. Yaeko asks what happened, and how the two were moved from where they were. Hiro tells her they must find Kensei, but she asks Hiro if he was able to move them, then realizes that Hiro has been doing amazing things around her, including the Battle of Twelve Swords and their moment under the cherry blossoms. She asks if Hiro loves her, and he tells her very much. She tells Hiro that everything she loved in Kensei was in fact Hiro, and begins to kiss Hiro. Hiro freezes time, and wonders about the space-time continuum, but then unfreezes time and kisses Yaeko. Kensei, watching from a distance, sees the two kiss. Later, Kensei knocks out Hiro, and Whitebeard brings a captured Yaeko and her father out to Kensei.

At Whitebeard's camp, Yaeko is trapped in a tent with Hiro and her father. She tells Kensei that he will never have her as his princess, and that she loves Hiro.

A guard walks away from his post in front of the tent; she removes her cuffs and runs to Hiro, who has fallen into a trance. She tells him to concentrate. The guard arrives at the tent, but there is no one to be seen.

Yaeko and Hiro are outside of the camp. She says that Whitebeard has won, and stopping Kensei is impossible. After Hiro explains his reasons for believing in Kensei, Yaeko asks if he would "risk his own life for his faith in [Kensei]?" He replies affirmatively, and tells her to wait under the cherry blossoms.

At the cherry blossoms, Hiro teleports back from Whitebeard's camp, with Kensei's mask in his hand. He tells Yaeko that Whitebeard is defeated; she replies, saying that he has saved them all, and that he can live with her and she will be his princess. He tells her that is not the way the story goes. They kiss, and he teleports away. Yaeko stands, crying and alone with the cherry blossoms' leaves falling in front of her.

In 1784, Adam tries to find fulfillment in marrying Yaeko's great granddaughter. He realizes that the descendant simply is not Yaeko, and stages his own death. 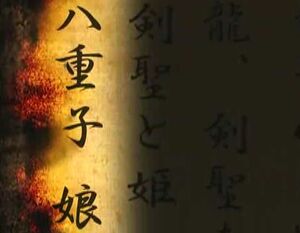 Yaeko's signature is seen on the Kensei Scrolls.

In Chapter 4, Part 2, "Kensei and the Dragon", Professor Karen Chamberlin documents that Takezo Kensei died in the arms of his princess. Many different stories are recorded through history about who the Princess was. Chamberlin believes that Yaeko was Kensei's great love. Professor Donna Dorn believes that Yaeko did in fact exist, but she was not Kensei's great love.

Please refer to Theory:Yaeko for fan-created theories and other speculation.