So there's been some changes, Altes has pointed out to me that Ink will air on the 28th instead of the 5th of October, therefore replacing Acceptance...so, do we get rid of this page? switch them? avoid this question until the episode airs? lol--Anthony Gooch 16:10, 22 September 2009 (EDT)

Are they done? Can they let him rest in peace now that they have killed him so many times? Or are they going to bring him back and kill him again in the season finale? Give the guy a break, he has made some mistakes, but he hasn't deserved all this.--Ratclaws 22:22, 5 October 2009 (EDT)

Trying to understand the timeline

Hiro returns from the past for the 46th time just after Kimiko tells Ando that Hiro is giving her away. Hiro is exhausted and admits that every time he tries to save Tadashi, he just fails. Ando tells Hiro to accept the truth as Tadashi calls. Hiro immediately tells him he'll be right there and starts to go for the roof. Ando asks what he's going to tell Kimiko, and Hiro just goes to the roof. This time, he sits with Tadashi and explains that he's tried to save Tadashi repeatedly, but he keeps photocopying his butt. Hiro admits it's time to face the truth. He tells Tadashi that he must really hate his job to keep photocopying his butt 47 times, and he should find a different job. Hiro explains that life is a gift and he's dying. Finally he tells Tadashi not to keep secrets from those you love, particularly not family. Hiro gets up and tells Tadashi that he'll always have a friend, and offers his hand. Tadashi bows and thanks him.

Have the writers changed their rules concerning time travel or something? When Hiro comes back from stopping the photocopier-butt shananigans the first time, I was expecting him to see himself in the past, and then have to wait for him to run to the roof, but instead he seems to have taken the place of the other Hiro. I hope this makes sense. Another way to look at it is Ando asks an un-inked Hiro why he said yes to the marriage thing, after time travelling, he asks an inked Hiro the same question... My question is where is the un-inked Hiro?

I'm putting it down to laze on the part of the writers, it's not the first time continuity has been screwed. What do y'all think? SomeoneImportant 14:38, 6 October 2009 (EDT) 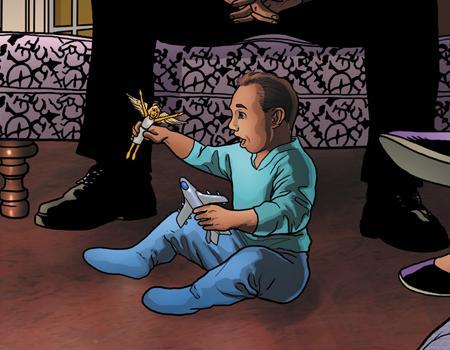 Was I the only one shocked to see Bryan Fuller's name pop up as the writer? I thought he quit writing for the show. Should we post something about this in the trivia section?--Cairoi 00:10, 7 October 2009 (EDT)

Is it me or is peter getting a bit 'stupid', i love peter, he's the best character out there, but in this episode when Nathan came to him and told him he has another power, peter saying it has to run in the family,, why din't he thought about how his brother got that power? And why is it if he thinks his brother got EM like he had, why din't he copies his power? Anyone else thinking like me? WaterRatj 19:24, 7 October 2009 (EDT)

There are 9 quotes just now. It may just be me but I think that's a tad too many. Can we remove a couple? Like the one with tracy and the governer saying about what tracy brings to the table. --mc_hammark 07:56, 11 October 2009 (EDT)