The shocking thing they did was reveal that Paulette Hawkins had an ability but then they killed her. It was a great novel but wow, I didn't like how they killed a somewhat important character that appeared in the show. The writers really intend on making Micah have a horrible life. A possible three family members dead in the span of a year? Although this may explain why Paulette wasn't seen again after the third episode? --Dman dustin 05:18, 22 July 2008 (EDT)

Is this not clear that Joseph Gallagher was in North Hollywood CA and Tom Drake was in Cody WY? I don't know where this "upstate New York" is coming from. I'm not going to fight, and I'll leave this up to MiamiVolts, who undid my changes. --Tisco 06:17, 4 August 2008 (EDT) 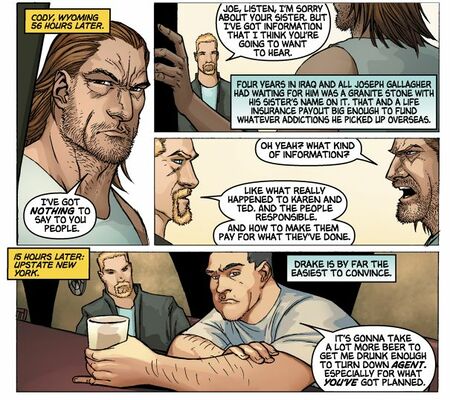 From the original PDF

"One of the locals manifested"

What do you think the power was that caused a crater that big? Induced radioactivity would have been too big to have not been spotted. --mc_hammark 18:00, 8 September 2009 (EDT)