The cast of Heroes has contributed artwork to be auctioned off to benefit the Pediatric Epilepsy Project. Please visit the auction pages to bid; auctions end approx. Nov 28, 2006.

Just a few quick notes about the switches: If there is a reference to a GN in the Notes section, it should be replaced by the GN history ... Also, most of the Notes references need to be fleshed out a bit to be included in the Character History sections. I was thinking, actually, it might be better to have the list on the Current events page to be sorted by character rather than by GN — when I do the switches, I'm going to do an entire character, not just a graphic novel. But this really only affects characters that appear in multiple GNs. I'm going to do Mr. B. now, so maybe it's not that big of a deal. ramble ramble ramble — RyanGibsonStewart (talk) 14:21, 5 February 2007 (EST)

Goodness. Both checklists are almost complete and we've only got 7 wanted pages. Apart from the GN histories on the character pages, we're suspiciously close to being ... caught up. Eerie.--Hardvice (talk) 16:13, 9 February 2007 (EST)

'There needs to be a SNEAKS Category on this website, because there are now too many of these kinds of sneak preview clips, all over television. The one this morning (February 26th) was from a future unnamed episode and was on CBS.

On the popular Rachel Ray 9 AM variety show, Rachel had Adrian Pasdar (Nathan Petrelli) as a guest. But before introducing him, they showed a CLIP of some upcoming episode of Heroes.

Here is a summary of that clip:

In the Las Vegas airport, Nathan and Hiro Nakamura are discussing how to get his SWORD past security. (Hiro is wearing the sword on his back, obviously gotten somehow from Mr. Linderman, perhaps with Nathan's help.)

Nathan tells Hiro that when he first met him he thought he was nuts, but now he knows about his powers and can agree with his mission to prevent a nuclear disaster in New York. Nathan derides his own ability to fly somewhat, saying it is pretty useless.

Hiro tells Nathan that it is hard caring for people, because everyone he tried to help he ended up hurting them instead. He has sent his friend Ando home because of this. Hiro also says that he knows why Nathan pretends not to care. He knows it is because Nathan cares too much for everyone.

Then the clip ends and Rachel Ray begins to interview Adrian about his marriage to one of the Dixie Chicks. Transcript needed

So for now, we have the main characters up. I was thinking, however, due to the prevalence of Sylar in the episode, a category with him would also be a good idea. However, this would mean we should have Ando as well, etc. So, should we include other non-main characters?--Bob 18:53, 19 May 2007 (EDT)

Should we add to current events if there is an open talk-page poll for the naming/coining of a new character or power?--MiamiVolts (talk) 00:43, 9 June 2007 (EDT)

We have just selected a new logo for the site, and I propose a second summer haitus project. Some other wikis (here, [1]) have skins designed specifically for their site. Anybody else like the idea? Would it be possible? ----

I included all main characters. For supporting characters, I chose to leave off any people that are dead or presumed dead and anybody who is not returning to the show for Season Two. We can always archive those people later if needed, but it'd be kind of pointless to archive a person's history if they're only in Season One. For recurring characters, none of those people were in Season One a substantial amount of times to archive their histories--in other words, if they appear in Season Two (even if they appear in a huge number of episodes), their Season One histories will look fine alongside their Season Two histories. I don't even think it would be necessary to put a "Season One" heading on them. -- RyanGibsonStewart (talk) 11:01, 19 July 2007 (EDT)

I submitted three questions (to CBR).

Hey, thanks for taking the time to read my questions. I've only got a few... For starters, I'm big into debates, and there is one that is driving us over at Heroeswiki insane. You guys nodded to "Electrokinesis" in a past BTE. Can we consider this a coined term, or is something along the lines of "Electricity Generation", "Electricity Manipulation" or "Electrogenesis" more accurate?

Second, we've seen the past "Rapid Cellular Regeneration", which could be shortened to just Regeneration, and the more recent "Adoptive Muscle Memory", which some people originally called "Photographic Reflexes." Will wee see any more powers scientifically renamed to the masses by Suresh?

Lastly, do you think any staff of the Heroes production team (anyone from writers to producers, etc.) will make cameo appearances on the show? I think it'd be cool to see a couple of you guys show a power... just try not to get killed by Sylar.

Hey again, and thanks again for taking the time to read my questions.

First off, you guys aren't ugly, -punches your shoulders-, don't be so down on yourself. =P

My questions this week are this.

In a BTE a few weeks ago, you appeared to nod to Elle's power being Electrokinesis. This kind of started a war (it's civil, don't worry) over what you guys intended. One side believes you were only parroting what the questioner asked, the other side believes you were acknowledging the name as right. Can you please clarify- should we consider "Electrokinesis" a coined term?

Also, we've seen Chandra and Mohinder name a few of the powers scientifically, such as Rapid Cell Regeneration and Adoptive Muscle Memory (which until two episodes ago was called Photographic Reflexes by popular consensus). Can we expect more Suresh-Appointed-Scientific-Ability names?

Now that it's the only one left...

After we going to do a season one summery of Jessica? She hasn't been explicitly mentioned (if I remember correctly), but Niki still seems to be having personality issues, but she doesn't have any Season Two entries. If we decide to do the summery, I'll get on it, if not, no skin off my nose. Lulu 18:47, 2 November 2007 (EDT)

Now that we have two graphic novels this week again, is it okay to change Current events to note both of them?--MiamiVolts (talk) 16:10, 6 November 2007 (EST)

I've noticed quite of bit of deletion of posts without any community discussion first. Articles and content on Wikipedia are suggested for deletion well before they are deleted, and I suggest the same occur here. In the event the item in question may contain purported spoilers, etc, I suggest the article/content to be deleted be moved to heroeswiki.com/"articlename"/quarantine, and the location of the quarantined information be linked to from the discussion concerning deletion in the talk area. Any takers on the idea? --TRECORD-- Talk/Contrib 22:24, 19 November 2007 (EST)

Is there a way to do most wanted stubs (instead of just stubs) by having DPL sort through and only printing out the top 10 of each sorted by the # of links to said page?--MiamiVolts (talk) 19:42, 11 December 2007 (EST)

Ok, I added into the history a new format floating the Birthdays and Holidays & Observances sections to the right. You can view it here. I think it fits in better that way. Other opinions?--MiamiVolts (talk) 00:37, 27 December 2007 (EST)

Is the writer's strike ending?

I can't find any literature on it, but I did notice a commercial for Prison Break, which has a new episode coming tomorrow. That shocked the everloving hell out of me. Anyone know what's up?--Riddler 00:55, 14 January 2008 (EST)

Just to say, the latest graphic novel is incorrectly displayed as 'Faces, Part 1' not 'Faces, Part 2'. Couldn't find a way to edit this as it said Godsend, Part 5 and not a direct link to the graphic novel, so can this be updated? Friskymuffin (talk) 16:14, 28 May 2008 (GMT)

I think we should get working on Season Two summaries. I know we're over a month away, but last time it took a while to get through all the characters and the Company article. --Bob (talk) 14:07, 2 August 2008 (EDT)

Should we have a page..

Should we have a page for the Premiere event? They're showing alot of behind the scenes stuff and sneak peeks, I just feel it should be chronicled or something. And my god, the Sylar/Angela scene.--Riddler 20:11, 22 September 2008 (EDT)

There is some speculation that this may be the final volume of Heroes, does anybody thinks the same?-- Yoshi | Talk | Contributions 15:33, 14 December 2009 (EST)

My firefox is having some big problems with Heroeswiki and i dont know why, it just crashes every 3 minutes (something like that). Anybody knows whats wrong?-- Yoshi | Talk | Contributions 12:39, 19 December 2009 (EST) 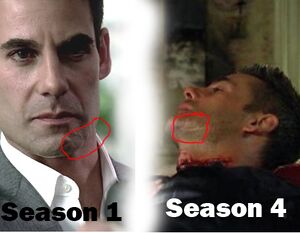 Now, I may be stupid for posting this, as I am sure that everybody else is just about as in-the-dark as I am. I hadn’t gave it much thought before, but after last night’s episode aired, something hit me: there is a very real possibility that next week could very well be the last episode of Heroes ever!!! I’m pretty sure that NBC hasn’t reached their decision about a season 5 yet. Is this true? I figured if anyone had some insight, it would be someone on Heroes Wiki. Some sources seem to think that season 5 is completely out of the question, while others believe that it is looking very likely that NBC will pick it up for another season. I’m confused! Does anyone know the truth??? I’m going crazy here! Again, I know that if someone had received an answer, that they would have probably posted the news already, however, I thought this was worth a try. Anyone? --Lynn Dolyn 15:49, 2 February 2010 (EST)

I added a listing for the twenty longest talk pages that we can use for archiving purposes. It includes all the talk namespaces except for 'User talk'. With regards to Episode talk, GN talk, iStory talk, and the like, I think the checklist should remain after the page is archived.--MiamiVolts (talk) 20:42, 13 February 2010 (EST)