Julien Dumont was an agent of the Company and the unwilling source of their "Dumont System". He was an evolved human with the ability to replicate at will.

Julien was an international crime ring operator apprehended by the Company, and then convinced to become one of their agents. In the course of his duties, Julien fell in love with Connie Logan, and eventually the two married and had a daughter, Penny. Julien was betrayed by the Company when he consented to undergo experiments to replicate his ability, but was instead secretly imprisoned at Primatech Research. Sabine Hazel rescued Julien, but he was killed in order to stop an army of clones.

Several of Julien's rogue clones are hunted down and brought to a holding cell.

Feeling angry and betrayed that she was lied to and that she fell in love with the wrong man, Sabine Hazel tracks down the real Julien Dumont. Using Julien's main clone's access card, she finds Julien in a Level 5 holding cell in Primatech Research, hooked up to machines which monitor his creation of clones.

Noah Bennet reveals that Julien has been held by the Company for "years", during which time the Company has forced him without his knowledge to create many clones of himself. This rushed and flawed process meant many of Julien's clones developed "unique personalities", that the Company found hard to control.

Julien is freed by Sabine and awoken into a state of severe shock. He doesn't recognize Sabine, and is disoriented and weak. Regardless of that, he agrees to accompany her in fleeing Primatech Research. With Sabine supporting most of his weight and agents chasing them, they rush down a level 5 corridor, down stairs, and into the parking garage. Julien then creates a clone as a decoy to draw the agents gunfire. The real Julien and Sabine then escape in an SUV, but are spotted and Donna Dunlap and Thompson, Jr. begin chasing them by car. One of their SUV's tires is shot by Donna and the SUV crashes off the edge of a bridge that crosses the Bronx River. The impact of this stuns Julien, who is dragged into another SUV along with Sabine by a mysterious man. Inside the new vehicle is another Julien clone.

Gael Cruz mentions Donna letting Dumont and Sabine escape as proof of her involvement with evsdropr.

A man drives Julien, Sabine, and one of Julien's clones from the wreckage at the Bronx River to a cabin. There, the clone tells Sabine to make Julien comfortable; Julien lies in bed with an oxygen mask. When Sabine learns the identity of Evs Dropper, she promises to get Julien out of there. However, Connie Logan tells Sabine to get her hands off of her husband.

Twenty years ago, Julien gets married to Connie and they have a baby a year later. Two years later, Gael approaches the couple and Connie signs a form for him noting her consent for Julien's blood to be tested and so an attempt could be made to mimic Julien's ability. After two more years, Gael tells Connie that Julien was killed. However, he was actually being held in a cell for experimental purposes. Many years later, a clone of Julien's takes Connie to the cell.

In the present, Connie orders a group of clones to secure Julien into a van when the Company arrives at the cabin.

As Connie dies from a bullet wound, she tells Sabine to run, carrying Julien with her. Sabine and Julien are picked up by Gael and Bianca. Bianca shoots Julien in the chest, killing him, and causing all the clones to die of similar wounds.

Micah and Thompson Jr. discuss Sabine Hazel and her unborn child. Micah remembers that because of Julien, many people were killed, including Donna Dunlap.

Evsdropr found a coded message from Sabine Hazel regarding Julien on Sabine's computer. It was set to be sent after she had returned from a mission, and uncoded it read: "If anything happens to me, check Julien."

primatechpaper.com has an Assignment Tracker profile on Julien (file: C011; password: JDsiy88p). Though much of the information in the profile pertains to Julien's Hartsdale clone and not to Julien himself, the personal history reads: 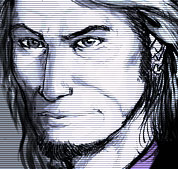 Julien Dumont was born in Brussels, Belgium. He was first apprehended by Agent Spektor in Bruges, Belgium, where Dumont was operating a petty crime ring spanning three countries. Local law enforcement officials had made numerous attempts to arrest Dumont but were frustrated repeatedly by his incontrovertible alibis, some of which were even supplied by police who had Dumont under surveillance while he allegedly committed a crime hundreds of miles away. Unknown to the authorities, Dumont was being assisted by a number of identical clones, whom he possesses the ability to replicate at will.

The Root Dumont's ability puts him at high risk of dissociative identity disorder. The Company has implemented rigorous psychological supervision, as well as chemical and psychoanalytic intervention as necessary.

When the Root Dumont is in a weakened or otherwise altered state, the personalities of mature offshoots become more dominant. New offshoots created during such a period experience high degrees of psychological and emotional vulnerability and are susceptible to coercion or imprinting. Initial studies indicate that immature offshoots are highly receptive to programming for Company directives.

In a roster posted on A Hero's Quest, Eric Thompson, Sr., is listed as going to Bruges, Belgium, on January 2, 1988, for business related to Julien. 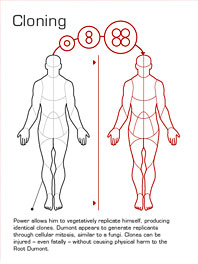 Julien has the ability to vegetatively clone himself, producing identical clones. Dumont appears to generate replicants through cellular mitosis, similar to a fungi. However, in Root and Branch, Part 3, a clone is clearly shown to grow out of Julien himself, much in the same way that Evan does in Revolutionary War, Part 2. Clones can be injured--even fatally--without causing physical harm to the Root Dumont.

According to his Assignment tracker file at primatechpaper.com, Julien's control index is 90%. His data analysis shows his biological level at 95, cerebral at 50, elemental at 80, and temporal/spatial at 30.

Please refer to Theory:Julien Dumont for fan-created theories and other speculation.