A lot of things are glowing. 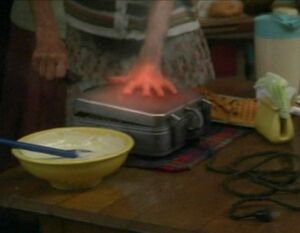 Mrs. Comey's hands glow too... does she have induced radioactivity?

I'm pretty sure its induced radioactivity, given how the hands glow and she's working at a place that needs nuclear energy. --TrueBlueBrooklynite 12:00, 16 March 2010 (EDT)

Things may not be as they seem, guys. For example, is this pyrokinesis? Or these two: are they the same power? Nope. I have no doubts Mindy's power is radiation-related, but it may not be the same as Ted's.

No, her power is not induced radiation. It's got to be a distinct ability, because her hands don't glow the same way Ted's do. Hers is more like a glow of light. It may be a radiation based power, but it can't be the same. In the Heroes Universe, powers are often manifested the same way within all superhumans who share similar abilities (Telepathy produces the same special effect, Precognition glazes the eyes over, Water Mimicry, etc. with the exception of Pyrokinesis, in which Flint's fire was blue, unlike the others...) And then on top of that, what does radiation have to do with her using her card or touching that thing to stop a nuclear reaction situation? No manipulation of radiation visibly occured...just like we thought that green energy was gas. No speculation (remember, like y'all are always telling ME?) User:Shadowulf1 01:09, 18 March 2010 (EDT)