From Heroes Wiki
(Redirected from From the Files of Primatech, Part 4)
Jump to navigation Jump to search 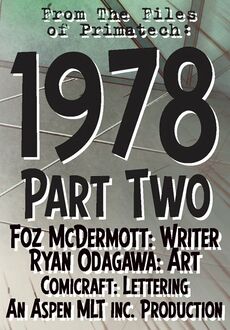 In her New York City office, Angela reads through Mindy's file and contemplates Mindy's words about how no two people are made the same and how she believes that Mindy has the power to stop what she saw.

Meanwhile, in the Three Mile Island reactor, Mindy stands and absorbs all of the radioactive energy from the reactor. She screams as her entire body is infused with energy. When Mindy feels that she cannot take anymore, she yells out that she must end this, and then redirects the energy into a vent. Exhausted from the effort of absorbing so much energy, Mindy passes out. She awakens in a hospital bed and Alfred Washburn tells her that Teddy is hiking with his wife and informs her of the massive storm. Mindy then becomes afraid when he mentions that Angela is asking questions.

Later, on the roof of the Deveaux building, Bob talks excitedly about what he believes Mindy can do. Arthur contradicts him, saying that she is dangerous. Angela agrees with Arthur, and explains that Mindy absorbed so much energy that she changed the weather for hundreds of miles around her. She goes on to say that hundreds are dead and Charles offers to go "clean up". Arthur tells him not to worry and introduces the founders to Maury Parkman.