Though I don't believe that Peter demonstrated Eden's ability, I think it would be safe to say he did, however, acquire this ability from at the least making physical contact with her (something he has not needed to do in order to acquire an ability). But if he did, would that make him the first Jedi? :-D --Bob 21:00, 21 Feb 07 (CST)

I know it's wrote upper in this same page but it has to be said again! People don't get it!! And it doesn't belong to the spoiler page anymore ? Aren't we in April ? So... I thought about it because an edit has been considered as speculation but it isn't, no ?? We should also update the power mimicked section... 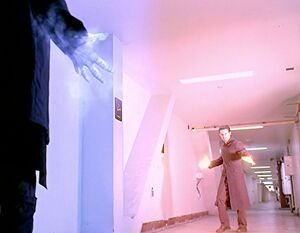 take a look at this video of episode Five Years Gone At around 8:20 you can see peter and sylar starts fighting...and sylar summons his ice,then peter says "fire" and red firey hands. I think he might have got it from claire's mom.

You know how Peter has to "remember" someone to use their power?

Well... don't you think Charlie...erm...Sylar's eidetic memory would serve as a NICE way to remember every person he meets? Imagine in the future in cases such as Walls, where he meets many people, with eidetic memory, he could harness so much power, even if he only met the person for a minute. Hehe, fun speculation.--Riddler 17:26, 16 May 2007 (EDT)

Can we say now that Peter has at least both precognition and postcognition? Do we want to call this something else now? Dreamcognition? Astral projection might fit since he was able to talk with Charles while dreaming, but I don't know if we're ready to call it that yet until he talks to someone else besides Charles in his dreams.--MiamiVolts (talk) 12:22, 22 May 2007 (EDT)

In the finale, when Peter was fighting Sylar, Niki started fighting Sylar as well. Then Peter stood up and told Niki something like "I can take it from here" and then appeared to be overpowering Sylar. Was this just adrenaline kicking in, or did his absorb her power?

When I first watched it live, I thought it was a blue-bolt coming out of Peter's hands also. However, after rewinding it and re-watching it; it simply appeared to be a display of Telekinesis only; and one of the Irish Thug's flashlight's just happened to cross through the scene in such a way to make it appear at first glance, to be a new power.

Why he can't remember

I guess it's possible that his mother Angela got hands on Peter before Nathan was able to find him. Eventually with the help of the Haitian she eradicated his mind for some reason. I guess the helix pendant is the Haitian's one.

My new guess is that Elle shocked him so hard, that he somehow suffered an amnesia BloodyFox

In "Out of Time" it does look like Peter uses enhanced memory that writers say he absorbed from sylar. So if he is using enhanced memory it seems like all he has to do is use it more and hopefully he'll remember everything. --Dman dustin