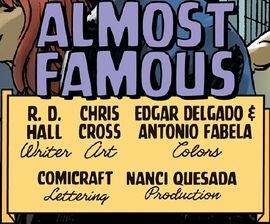 Working as a security guard at a concert, Matt Parkman asks to check the inside of a concert attendee's coat. Suddenly, Matt hears someone thinking about murdering Heather Haze, the star of the concert. Matt thinks that the thought came from the man he is inspecting, and he asks the man what he said. The man, however, says that he didn't say anything, and thinks that Matt should hurry up as he needs to go to the bathroom. Matt picks up on this thought and lets the man go on his way. Sensing that something is wrong, Matt asks a fellow security guard to cover his station for a while. The colleague says that Matt can't leave his post, and that he'll report Matt to their superior. Matt, however, threatens to report to their superior about the times that the colleague let people pass security without checking their bags. The colleague tells Matt to take his time.

Running through the crowd, Matt looks for the person who thought about killing Heather Haze. He runs into a woman, and asks her why she is here. The woman is confused and thinks that Matt is crazy. Matt, picking up on this, says "Never mind" and continues looking. He yells into the crowd, calling for the killer to slow down and talk to him before he does something stupid. Another concert attendee asks Matt who he is talking to, and Matt says that he doesn't know. Matt is then radioed by his superior, Jerry, who asks him where he is. Matt yells for Jerry to postpone the concert, saying that there is someone who is going to kill Heather Haze. When Jerry is skeptical, Matt shuts his radio, thinking that this will get him nowhere.

Matt tells himself to think like a detective, and asks himself if he was a killer, where would he go. He turns and sees the assailant, running away. Matt chases after him, and they arrive at Heather Haze's dressing room, where the assailant aims his gun at Heather. Matt telepathically disarms the assailant by ordering him to give him the gun. When Heather Haze offers to thank Matt in front of everyone at the concert for saving her life, Matt disagrees and instead uses his ability to make Heather forget about him.

Matt goes home, thinking that he can't go back to that job. Arriving home, he is greeted by Daphne. He tries to persuade Daphne into keeping a low key about their abilities, but Daphne says that she won't be caught. When Matt asks Daphne to at least try to keep a low key, Daphne playfully says that she'll try not to be caught instead.