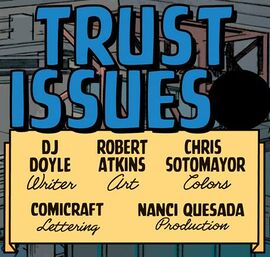 Thompson, Jr., Gael Cruz and Devin track down an evolved human agent named Cushing, suspecting that he is the killer of four normal agents in the Company. They follow Cushing and enter an industrial building, only to find Cushing standing next to the dead body of another agent. They accuse Cushing of killing her with his ability. Cushing tries to flee, but winds up sparring with Thompson, Jr. until Devin shoots him dead, saving Thompson, Jr.'s life. However, due to Cushing's last words and a flower sent to Thompson, Jr. by evsdropr, Thompson, Jr. realizes that evsdropr set them up and tricked them into killing Cushing, who is not responsible for the murders.

Two weeks later, when Thompson, Jr. is in a Company file room reading information on his new partner, Donna Dunlap, Donna interrupts and looks at a photo of a painting by Isaac Mendez that shows her dead.