Emile Danko, also referred to as "the Hunter", was a former senior agent of the Department of Homeland Security, who served as the leader of a team of soldiers hunting evolved humans. He was originally doing this on behalf of his superior, Senator Nathan Petrelli, but since Nathan's ability has been exposed, Danko was left in full charge of the operation. He was framed by Sylar, who took on Danko's identity and killed some of his agents. After being given a compass by Joseph Sullivan, Danko was killed by Edgar, whom Samuel Sullivan had ordered to murder Danko and retrieve the compass before Danko could take him in. 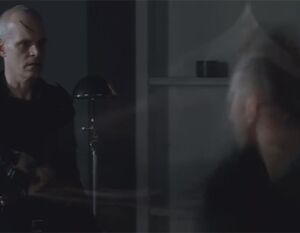 Danko is killed by Edgar.

When Tracy Strauss attempts to drown Noah Bennet in his car, Danko shoots in the window, saving him. He proposes that Bennet and he team up to kill Tracy before she kills them and reveals that despite his operation being shut down, he's still hunting evolved humans. Later at an abandoned Building 26, Bennet attempts to save Tracy, himself and Danko by removing Danko's memories of Tracy. The Haitian erases his memories, but later Tracy approaches him in his apartment. Finding him with no memory of her she decides not to kill him. Danko then finds Edgar in his apartment who demands that he give him something. When Danko refuses, telling Edgar that he would never get it, Edgar kills him.

Tracy calls Noah over to Danko's apartment, and he finds her crouching over Danko's body. She explains she had decided not to kill Danko when he had no memory of her, but a man arrived and killed him before she left. Noah notices all the wounds are around the stomach, and reaches inside, pulling out a key. He tracks the key to a safety deposit box that contained a compass which Samuel sent Edgar to retrieve.

Edgar is sent by Samuel to retrieve Joseph's compass from Danko. Samuel tells him to kill Danko because it is what Joseph would have wanted.

Samuel claimed that Danko was the one who killed his brother, although it was really him.

Samuel and Joseph go walking near the Carnival. Joseph explains to Samuel about his ability while Hiro and Lydia watch on. Joseph tells Samuel that he has given a compass to a man from the government and that he was coming to get him. Hearing this, Samuel kills Joseph. Later on, Samuel changes his story that it was not Danko that killed Joseph, but Edgar.

Danko's name and a picture of his corpse are on Noah's wall as he is trying to figure out what the compass means.

Lydia uses her empathy to discover that Arnold's son Mel has been captured and killed by Danko. Later, Joseph meets with Danko and tells him about the carnival. Interested, Danko agrees to Joseph's deal and is given a compass. Joseph tells him that he will need one of them to use it and tells him that he must only take Samuel.

Samuel attempts to justify killing his brother by saying to Claire that he was only protecting the family. Samuel tells Claire that Danko and the other men from the government lured Joseph in. He claims that Joseph led him right to the carnival. Samuel continues to say that Danko worked with her father and that Danko imprisoned her. He then asks Claire how she thought her father got the compass, implying that Danko gave it to him.

Edgar tells Noah that Samuel ordered him to kill Danko and to slice Noah open.

In the Quarry, Cassandra Hays finds a letter from Danko to Trevor Mason. In the letter (written on Department of Homeland Security stationery), Danko thanks Mason for the job offer at the Quarry, but politely refuses the job. He also offers to give Mason a list of replacement candidates for the Quarry job.

Prior to Heroes Reborn starting, the Heroes Reborn app was released with a video summary of Danko's history. The summary included:

"There are times in war when someone has to fall on a grenade."

"You're a dime a dozen, and eleven of the twelve are unreliable."

"How did you catch him?"

"I'm smarter than the average bear."

Please refer to Theory:Emile Danko for fan-created theories and other speculation.