If/when we set up sidebars for the former plot point categories, this article is going to need a lead image. Any ideas?--Hardvice (talk) 01:43, 30 December 2006 (EST)

I don't think it should be a prophecy, simply because that would be redundant. Maybe a picture of Isaac with his eyes glazed over? I'm open to other suggestions, of course... - RyanGibsonStewart (talk) 15:45, 30 December 2006 (EST)

I added as the lead pic an image of Isaac seeing Claire and then "painting" her. Besides the pic being an awful version and needing to be reuploaded, I just wanted to get some feedback as far as the infobox is concerned. I put it into a power infobox, because that was the closest thing I could think of - nothing else works. It is on the powers portal page, afterall. Unfortunately, so is Power theft, which has a different infobox. I think the 2 different infoboxes are fine, given that prophecy really is an extension of a power, and power theft is probably not a power at all (though both still belong on the portal page). Blah blah blah. Any objections to the infobox? - RyanGibsonStewart (talk) 19:01, 13 January 2007 (EST)

This is going to look amazing when they are all cropped to match! The only thing we'll need to be careful of is the caption length. If the captions are too dissimilar in length, it can throw the formatting off. Maybe we can force a valign=top to minimize the effect?--Hardvice (talk) 04:54, 2 December 2006 (EST)

I realize the images are grouped by the episode in which the prophetic painting appeared, but it can be confusing when the fulfillment of the prophecy occurred in an earlier episode. Would it be hard to separately identify the prophecy ep and the fulfillment ep? --Ted C 15:02, 9 January 2007 (EST)

It's a little bit hard, but not impossible. I would actually suggest just putting some kind of note in the caption about when the prophecy was realized. For instance,

I think something like that would be beneficial for a number of reasons. - RyanGibsonStewart (talk) 15:25, 9 January 2007 (EST)

There. That should do it. Hopefully that helps clear up when the realizations took place. - RyanGibsonStewart (talk) 01:58, 10 January 2007 (EST)

Thanks, Admin, and thanks as always for all your hard work, Hardvice ... Okay, I've uniformed the length of each pair of captions in most cases. Some issues:

I tried to do some cropping on my own, but of course I'm blessed with a crap computer. It's like a Commodore 64, I swear.

The table seems a little off-balance. I know this is a small thing, but the left column of the table is a little wider than the right. I wouldn't really mind, but the column headings seem to be equal, so the division between the two does not match up. Any chance someone could check into this? Thanks! - RyanGibsonStewart (talk) 15:19, 5 December 2006 (EST)

On NBC's Heroes message boards there is a thread called The Infallible (?) Isaac Gallery, it has some that are missing from here, mostly when Hiro follows the comic and Peter's Prophecies (there is one here but it is marked as Isaac's), theirs are low quality and not completely accurate but they should be checked. -Level 03:19, 26 January 2007 (EST)

That's a great link. It's good to see that others have some of the same ideas as we do. I agree, they have some flawed theories (I don't buy that anybody changed the future at Homecoming - I think the shadow on the steps was Peter all along) and mistakes (I'm also not buying that Jessica beating up her dad is the cover of 9th Wonders, Issue #9). It's also poor quality, but that's okay. They did have a few that we don't have (mostly Isaac's sketches of the BTD) & I'll get to work on those as best I can. Thanks for the link! - RyanGibsonStewart (talk) 09:44, 26 January 2007 (EST)

I think you all need to give some credit where it is due. Seagryfn at NBC/ OWI had started this concept WELL before you guys did it here, 11/18/06 to be exact. Her work there has been outstanding and goes much more in depth than you guys do. Please give her credit for this idea...she started this gallery 6 weeks before you guys did. --Deasnuts 22:38, July 24, 2007 (EST)

I have tried to collaborate for a long time here but it always seems as though my input falls on deaf ears. This gallery/ idea was started at NBC and it should be noted as such. --Deasnuts 01:00, July 25, 2007

I added the doodle Peter did while in the hospital. It's not Isaac's, but I think it still fits under the category of "prophecy". He had been doodling it earlier, and then fulfilled it without knowing. The way the episode is edited lends itself to the idea that this is a prophecy as well. I don't know how Peter mimicked precognition at this point, but I think we're safe to assume that this was definitely a prophecy. - RyanGibsonStewart (talk) 00:37, 29 January 2007 (EST)

I don't know if this is the best place to post this comment, or if it even if it's important enough to be included in any of the acticles, but I've noticed a difference between the paintings Isaac painted of his own death (as well as his corpse that was found by Hiro in the future) and his actual death at the hands of Sylar in .07%. In both the paintings and Hiro's discovery of Isaac's body, Isaac's facial hair is grown out significantly. However, while he does have some stubble, he is comparitively clean-shaven when Sylar kills him. If it were just the paintings that were different, I'd be able to chalk it up to artistic license, but the fact that the conflict extends to Hiro's incident in the future, makes me think twice. What do the rest of you think? Simple continuity error, or evidence that the timeline has shifted? -- Joser Kyind 21:30, 27 April 2007 (EDT)

The Exploding man isn't neccesarily Peter; in the graphing novel (Chapter 30, Fallout), Sylar is the bomb. The future isn't set in stone!

About the eyes thing

What should we do since the prophecy template has only two column. For exemple, this needs 3 columns. 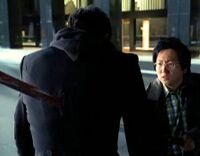 I apologize if I'm putting this note in the wrong place, but I'm still not familiar with the full site. My concern regarding the sword fight painting in the latest series: Hiro's glasses. He wasn't wearing glasses in the episode, but it looks as though he's wearing them in the painting. Considering that Hiro and Adam will likely meet again, can we safely assume this specific painting-prediction has come to pass yet? Dingus

Should it be noted somewhere that not all the paintings have been realized yet? The only example I can think of currently is Micah in the burning building but there's probably a couple more.Disposition 16:59, 16 December 2007 (EST)

Should we really include the same realization for each artistic depiction of the same event, as done with the eclipse in Haiti and Hiro yelling "Yatta!" in Times Square?--Citizen 19:53, 25 November 2008 (EST)

I think this page, if Precog is going to be a plot device for the show from now till end, is going to become a MONSTER! This page also loads a little slow. A solution would be to make it collapsible by season, in a similar way to our larger "examples of abilities" pages (like the one for regen). Thoughts? --SacValleyDweller (talk) 02:41, 15 February 2009 (EST)

Look at the prophecy painting of Sylar cutting open someone's head. if you look at the hair, it's not over the ears. And in real life he has his hair over his ears. And his hair is shorter in the painting. I know this may sound crazy but i think this is still a prophecy that has to come true. -- Yoshi | Talk | Contributions 17:45, 24 December 2009 (EST)

Shouldn't these prophecies be on here? They still count. --Boycool Two little mice fell in a bucket of cream. The first mouse quickly gave up and drowned. The second mouse wouldn't quit. He struggled so hard that eventually he churned that cream into butter and crawled out. Amen. 23:40, 15 June 2010 (EDT)

As it is, the painting of the mushroom cloud in New York is accompanied by an image of Peter exploding over the city. Should there instead be an image of the explosion that took place in New York in the original timeline depicted in the show? Maybe using the graphic novel The Crane because it depicts the explosion more clearly than in the episode. --Nogard 17:45, 10 August 2010 (EDT)

Re: This Battle is Mine

I'm not sure the prophecy is a direct translation from French. Perhaps someone with more French knowledge than myself can confirm whether it is or not. Please see the discussion at File talk:511 second prophecy.jpg.--MiamiVolts (talk) 11:07, 28 January 2016 (EST)