From Heroes Wiki
< Talk:Sylar
Jump to navigation Jump to search

During Sylar's last conversation with Mohinder, we again heard the distinctive clock-ticking sound effect. I'm wondering if we should consider this a sign that he is analyzing the person with his special ability. --Ted C 13:11, 13 February 2007 (EST)

In Episode 14 after Sylar uses telekenesis to throw Mrs. Bennet against the glass cabinet, he walks over to her and says "Hi". At this point his voice has an unusually deep tone, reminiscent of the way Eden spoke while using her power of persuasion. Perhaps he was about to use the ability to get Mrs. Bennet on "his side" and help him get close to Claire? Unfortunately, we can't be sure as HRG arrived before he could continue.

Well, if the co exec says Sylar eats brains, then that's it.

Not necessarily--a co-executive producer's statements are not canon. The writers actually make most of the story decisions. Greg Beeman, for instance, has been wrong on a couple of things before (namely the powers that Peter absorbs). Besides, I don't know of any quotes (though there may be some) that directly say he eats brains. Most of them flirt with the idea, afaik. — RyanGibsonStewart (talk) 20:48, 16 May 2007 (EDT)

In the 316/613 theory that was just deleted, it mentioned Sylar was an altar boy. Is this completely fabricated, or does somebody know something I don't? - RyanGibsonStewart (talk) 03:02, 5 January 2007 (EST)

Forgive me, for I have sinned.

Whatever happened to the maniacally depressed, psychotic Sylar that Mohinder learned of while searching his apartment?--Riddler 01:34, 29 January 2007 (EST)

Oh, I believe he's still psychotic. As for maniacally depressed, I think that little room still exists somewhere in the recesses of his brain — I believe he still has a hint of guilt for what he does. - RyanGibsonStewart (talk) 01:48, 29 January 2007 (EST)

On Sylar's Apartment discussion page I posted links to a bunch of photos from the NBC site of his apartment. It seems to indicate an incredible religiosity - and not just due to the phrase everywhere....but all of the candles and what appears to be Saints and such. Bkdelong 20:32, 17 February 2007 (EST)

Gabriel Gray. Gray & Sons. The Watchmaker. Well, we know that, in Christian mythology, Gabriel is an archangel. But who's the other son? And what of "the Watchmaker"? This obscure reference is very clever: Deism is a religious philosophy developed in Enlightenment-era Europe, and followed by several American founding fathers. The central principle holds that God has created many worlds like ours, and simply sets time spinning, like "a great Cosmic Watchmaker," (I'm not sure whose words those are... maybe John Locke? I'll look it up.) Lander 06:02, 10 May 2007 (EDT)

At the end of The Fix, it appears there is a piece of plastic attached to the back of Sylar's head on the right. It appeared to be a shunt of some kind or some way to access the brain. Could someone with more medical training identify what this is? Thanks!! Disney42 01:17, 30 January 2007 (EST) 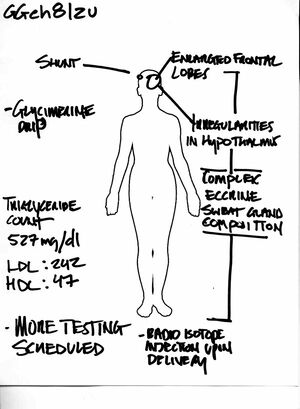 Check this image extracted from primatechpaper.com it appears to be the shunt. And btw, what about the "tic-tac" thing we hear in Sylar's head since he feinted death ? --FrenchFlo 11:19, 31 January 2007 (EST)

I think the term you're looking for, FrenchFlo, is "sound effect". That's exactly what that tick tock sound is. It's a cool sound effect, and sometimes an audio clue that Sylar is using is original power. Sylar didn't gain enhanced hearing until some time after he locked in his Primatech cell. When he killed Hank, he hadn't yet met Dale.

Are powers ALL he absorbs?

In the page for Zane Taylor it mentions:

he demonstrates Zane's ability, at certain points even mimicking Zane's comments and manner of speaking.

and this got me to thinking. Is it possible Sylar is, at least in the short term, absorbing more than just power? Could he get some knowledge and maybe memories or personality?

I ask because, before he ate his first power, his personality seemed very different than the aggressive hunter he is today. Perhaps he gets some residual long-term things from each consumed victim, and, in the short term, this could explain his very definite mimicry of Taylor. --Waffle Fan 18:35, 15 February 2007 (EST)

Could Syler possibly have the power to fake death so well, but really be alive. Cause I don't think it's easy that once you're dead you're going to wake up. --Bettyfizzw 09:38, 17 February 2007 (EST)

All point to telekinesis?

A thought: one could destablize metals and create ice from the air by slowing down and speeding up molecules. Something to think about - I wonder if Sylar's intuition will enable him to figure out how to augment his powers based on what he knows. Bkdelong 21:29, 17 February 2007 (EST)

Just noticed this, but Sylar ditches his glasses after acquiring TK. Did he somehow do eye surgery on himself or figure out how to fix the connections from his eyes to his brain to improve his eyesight? (Or just a stretch, but did he purchase contacts????) - Bob

Directly linking to images on other sites, like that fark.com post is doing, is stealing bandwidth (which is not free). It's especially harmful when done on high traffic sites like fark.com, so sites like that are disallowed from linking directly to images here and instead get that little ad. Not to mention that it states on the main page of this wiki that any direct offsite image linking should also include a link to the wiki itself. By the way if that posting happens to be yours and they let people edit posts, removing the image would be appreciated. :) (Admin 20:32, 2 March 2007 (EST))

Nah, wasn't me, just saw it, always gets my attention if a site like this shows up on FARK, especially for a non-Heroes related article --Baldbobbo 16:22, 3 March 2007 (EST)

I just recently had a thought about the whole Sylar/Peter thing, and realised what how this all is connected and intentional (as other things in the Heroes story appear to be). Everyone knows that Sylar's ability is to be able to find out how things work,but in my view this is less about just stealing people's abilities and more about being able to control them. Wouldn't this suggest that Peter, after coming into contact with Sylar, is able to find out how all his powers work and be able to control them much better?

I know that this is a bit dodgy given that Peter has been near Sylar before, but it seems more like Peter can only empathise with hero's abilities when he comes in contact with the abilities themselves rather than just the person (despite a little evidence to the contrary when Peter uses healing powers at the homecoming after only being near Claire momentarily).

I'm putting this suggestion out there just to see what other people think of it and I guess to see how much I deserve waffles.

I think it's good to put the powers he showed in the alternate timeline in a special place in his article, but I don't think they need to be included in his infobox. --Ted C 14:02, 25 April 2007 (EDT)

I don't have any info to substantiate this, but I think that Sylar will actually explode (much to the chagrin of Hiro) using Candace's and Ted's powers. After that, with the government perpetrated xenocide of heroes, Sylar will calm down (with no one to murder)and protect the heroes from the government.

This article now has sixteen memorable quotes, several of which already appear on other articles, and others of which are, out of context, completely unremarkable. This is more than any episode article even. At this point, I'm in favor of simply removing the memorable quotes section from all articles, since we don't seem to be able to practice any kind of restraint or editorial judgment. They're overwhelming the articles and most of them are just not very good (people seem to have trouble distinguishing a memorable scene from a memorable quote) and don't really add much to the article.

Barring removing all of the quotes from all of the articles, I think it's time for some bright-line policy as to the maximum number of quotes (and maximum length of quotes) a given article can have. That's basically what we did with the examples on the powers articles, and that worked out quite well. My suggestion would be no more than four lines of dialog or four sentences per quote, and no more than four quotes per article. That still makes for a fairly substantial section. What does anybody else think?--Hardvice (talk) 13:23, 14 May 2007 (EDT)

From this week's episode, it appears (or disappears!) that Sylar has taken Claude Rains' invisibility power. Jarrett 09:42, 16 May 2007 (EDT)

Okay, this is possibly very lame, but if any of you noticed or have the episode available to re-watch (iTunes, etc), when Sylar flips the van Ted was in, it screeches to a halt, and the camera swings from around Sylar's front to behind him. When it swings around, there is a flash of blue light that looks kind of like electricity coming from his hand. It makes a static-y sound as well. I don't know what this could be from, because it's not any spark from the van or any other light around. It is accompanied by his telekinesis noise, but I assumed that was to stop the van from moving. This probably isn't the place for discussion of theories but I know that we're short one or two of Sylar's unknown powers. Just thought I'd ask. It's about 32:54 in if you have it on iTunes. OUChevelleSS 19:22, 17 May 2007 (EDT)

Sylar presumably has at least two powers that we've not really seen. He keeps demonstrating the ability to survive injuries that should kill him (a sword through the chest, gunshot wounds, etc), but it's impossible to say exactly how. For all we know, he just holds himself together with telekinesis. --Ted C 09:34, 22 May 2007 (EDT)

Yeah, I was the one who put that, as it seemed to me that he had it based on "The Fix" (or was it Godsend?), where he fakes his death to Hank, as well as the stab, all this held together by the cockroach. It's safe to say that he doesn't have the ability to turn into a cockroach (if he does I'm going to stop watching the show; that is a terrible power, magamorphosis), but this all seems like something along the lines of suspended animation to me. If you look at his known kills and his known powers, he should have two more, one of which I'm guessing has to do with suspended animation.