Beginning from where the previous episode ended, Sylar is shown to be unaffected after Emile Danko attempted to incapacitate him by stabbing Sylar in the back of the head. Sylar explains that by using his shape shifting abilities, he has moved the "off switch". Sylar then stashes Nathan Petrelli's unconscious body in the bathroom. He morphs into Danko, shooting at and supposedly killing some agents. The real Danko is framed. Sylar morphs into Agent Taub and helps apprehend the furious Danko.

Meanwhile, it is revealed that when Noah Bennet, driving his car, had been stopped at the roadblock, Claire Bennet and Angela Petrelli were not actually in the vehicle. A little while previously, Noah had realized the construction crew roadblock was a set-up, and had Claire and Angela leave the car, resulting in only Noah's capture. From there, Claire and Angela head to the Capitol building in Washington, D.C., where Angela informs Claire to find her father, Nathan Petrelli. Angela says she had dreams of the future, and leaves to go find Matt Parkman; she says that Nathan will be in trouble and that Matt will be able to save him.

Sylar, meanwhile, has dressed himself in Nathan's clothes. He tries to wake Nathan up in order to "suck out" his memories, but has to resign to drawing what he needs from Nathan's cufflinks. Nathan's aide enters the room, with Sylar facing the other way, and announces that Claire is there to see him. Sylar morphs into Nathan and turns around. He tells her to send Claire in.

Danko and Noah make a pact.

Claire walks into his office, but is wary about whether or not she's meeting her father or Sylar. Sylar touches her necklace to get the memories of her and Nathan in Mexico in order to convince her he's Nathan. She wishes to accompany him to warn the President of Sylar, and Sylar agrees she should come. Claire doesn't notice Nathan's body in the bathroom, even when Sylar leaves the door open. He slips on Nathan's jacket and the two head off to the Stanton Hotel. Liam Samuels, the White House Chief of Staff, greets Sylar, as he and Nathan attended boarding school together. Sylar signs in with his left hand, which Claire does notice. Sylar claims to be ambidextrous, but Claire is suspicious. They get in the elevator, where an agent named Frank accompanies them up to the Presidential suite.

Danko, meanwhile, is taken to the same cell where Noah Bennet is being kept. Danko admits he made a mistake in teaming up with Sylar. The two make a pact, but before they can shake on it time freezes. Following his nosebleed, Hiro Nakamura and Ando Masahashi break into Building 26. They open the door to Noah and Danko's cell, but it's not what they're looking for. As they search around the office, Ando pulls the pictures of him and Hiro from the Targets board. He then notices Hiro's ear bleeding, but Hiro shrugs it off. They find the prisoners hooked up to the drugs and replace them with the members of the Building 26 unit. When Hiro reverts time, he begins to feel dizzy again. Mohinder Suresh, who was amongst the first prisoners freed, informs Hiro that his body is rejecting his power, and stopping time again could result in his death.

Elsewhere in the building, Danko and Noah notice the opened door. Danko proposes they take down Sylar with a large tranquilizer dart to subdue him. However, as Noah looks into some other files, Danko turns to use it on Noah. Hiro stops time once more to take the tranquilizer from him and injects Danko with it. Hiro reverts time and then collapses. Mohinder and Ando care for Hiro as Noah calls Claire to check up on her. 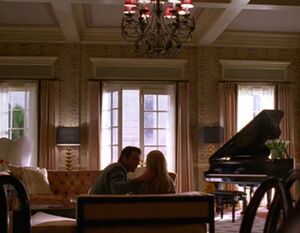 Sylar chats with an unwilling Claire.

Back at the hotel suite, Claire hears her phone ringing. She checks to see who it is. Noah asks her if she's alright, and Claire tells him she's with Nathan. When Noah asks her how she's sure it's Nathan, the Claire on the phone shushes the real Claire and turns back into Sylar. Noah is shocked to learn who he is really speaking to. Sylar hangs up and proceeds to make Claire pour them some wine. He tells her about his father, and then reminds her that everybody eventually dies—except for them. He proposes that Claire might one day come to love him, and tells her that she could be his First Lady. Claire, however, swears that she will try to kill him every day for the rest of her life.

Peter arrived at Nathan's office to find his brother just regaining consciousness. They head off to the Stanton Hotel, but are stopped by the Secret Service, who say that Nathan has already entered the building. Liam Samuels escorts them in, saying his men will take Sylar out, but Peter says they will be killed if they try. Nathan says that Sylar is "one of them", then corrects himself: "one of us". He floats into the air, and says that Sylar can only be stopped by other people with abilities. The Secret Service agents pull their guns on Nathan but Samuels tells them to stand down. Nathan asks Samuels to give Peter and him a five minute head start before Liam sends his men up.

Peter and Nathan are shown to the top floor by an agent named Jason, and arrive at the Presidential suite just as Sylar throws Claire out of the room. Sylar charges his hands for battle, as Claire prompts the Petrelli's forward. Nathan and Peter fly into the room, with the door slamming shut behind them. Claire tries to open the door, but is forced to watch through the crack instead. A brief duel commences, resulting in Sylar and Nathan flying out the window. Claire rushes in and finds Peter, unable to fly. They head downstairs to find Nathan, but come across Noah Bennet, who still believes Claire is Sylar. Peter assures him that she's not. Peter confirms he has taken Sylar's power, and they can now stop Sylar. The Secret Service burst in, targeting the three. Claire then puts herself in front of their guns and tells them they can listen to her before or after they shoot.

Meanwhile, back in the hotel room, Nathan is thrown by Sylar onto a piano. Sylar then slits Nathan's throat and watches him bleed to death. He comments that Claire will be very mad at him before shape shifting into Nathan, and leaving the room. 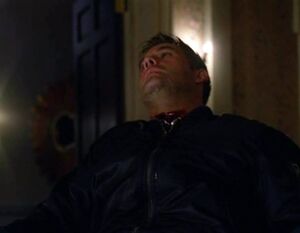 Angela manages to find Matt stepping off from a bus, who was intending to head to Building 26 to stop the agency. Angela convinces him to come with her, telling him that without Nathan the government will not stop hunting evolved humans. Matt uses telepathy to trick Jason into letting them through. Matt sees Nathan's body first and warns Angela that she doesn't want to see the room. Angela pushes past him, saying that she needs to. She then screams, commenting that she doesn't understand; Matt was supposed to save Nathan. Matt watches helplessly as Angela cradles her sons body.

After taking Sylar's body upstairs, Noah sends Peter and Claire off to "find Nathan". Noah explains that they intend to use Matt to alter Sylar's mind to believe he is Nathan, with Sylar's acquired ability of clairsentience enabling him to fully embody Nathan's personality and gain his memories. Matt initially doesn't want to, but Noah tells him that Nathan would be the only person that could convince the President to shut down Building 26 or any such future agency. Angela then asks him what he would do to save his son. Matt finally agrees. He grabs Sylar's head and begins to verbally prompt Sylar to forget everything about himself and become Nathan. After Sylar does so, he begins to shift into Nathan's appearance. He then wakes up, confused that his mother is there.

Volume Four ends with Claire, Noah, Angela, Peter, "Nathan", Mohinder, Matt, Ando, and a recovered Hiro all gathered around the burning corpse of Sylar, which Noah retrieved from cold storage at Building 26. The group then proceeds their separate ways, and Nathan confirms the President has indeed shut down Building 26, and the funds transferred so that Angela and Noah can start up their own company. 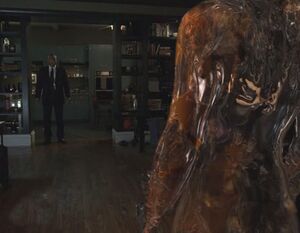 Tracy has learned a new trick.

Volume Five begins six weeks later. Kent Harper, a former Building 26 agent, arrives home and notices that water is overflowing from his sink. The water begins flowing, and it stops at his living room. Suddenly, the water rises and it morphs into Tracy Strauss. Tracy says he is number four.

Sylar, who now has memories of Nathan and none of himself, sits in his chair at his office and reads a newspaper article about the drowning "incidents". Angela walks in, and exclaims she hasn't heard from him in weeks and was starting to worry. Sylar says he hasn't felt like himself lately. Angela says that he needs to be happy and that this is "his" time. Sylar doesn't seem to pay attention. She asks if he heard a word she said, but Sylar just stares at a clock across the room, unknowingly studying how to fix it. He walks over to it, removes the lid, and turns the minute hand back slightly, stating that the clock is running a minute and a half fast. After the clock is fixed, Sylar appears to be a better mood. He then takes his jacket, and leaves the room asking Angela her choice of food for lunch. Angela stares at the clock, visibly shocked.

"And then I'm going to meet the President."

"Oh just to shake his hand, and then I'll be the most powerful person on the planet."

"You'll have to kill me because there's no way I'm going to let that happen."

"And then you got into bed with Sylar. That's all over now. Clearly."

"I'll keep trying to kill you for the rest of my life."

"Well, everybody needs a hobby."

"Have you ever stopped to think about how much we have in common, Claire? You were adopted, I was adopted. You can't die, I can't die."