Noah looks at the picture of his death as Sandra walks in with Mr. Muggles. Noah asks Sandra if Claire is dating anyone. Claire walks in and her parents ask about dating, saying a boy could be a threat. Noah says he wants to meet him. Claire shrugs it off and says there is no boy.

In New York, Molly wakes up screaming. Matt comes in, and Molly apologizes, saying she can't help it. Mohinder comes in as well. Matt goes to get her water, and Mohinder and Matt talk to try to figure out what's going on. Molly asks Mohinder when the nightmares will stop, and Mohinder tells her he doesn't know, then sings her a lullaby.

In Washington, D.C., Nathan waits outside his sons' school, and they come to see him. Nathan asks if they like his beard, but since they don't, he asks if they want him to shave. A teacher asks Nathan who he is. When he says he's their father, the teacher says he can't be here. Nathan asks the boys to go with the teacher.

In Mexico, Derek, Maya and Alejandro are driving. Maya asks Derek if he can take them to America, but he tells them about the problems at the border. Derek stops the car and finds a man in the middle of the road. They turn the man over, and it's Sylar, asking for help.

Micah wakes up to Damon dropping water on Micah's forehead. Nana asks if they're ready for school, and Micah tells her yes. Damon asks for $65 to purchase a wrestling pay-per-view. Monica comes in and asks if she looks different, talking about her confidence. Nana watches a cooking show about making roses from tomatoes, and Monica leaves. Micah tells Damon that he knows a way for him to get pay-per-view.

Angela admits to Kaito's murder to Detective Fuller and Matt. Angela tells them that she attacked herself since she was distraught. Matt reads her mind and she asks him to let it go as more questioning will lead to people finding out about evolved humans.

Claire gets offered a slot to try out for cheerleading for standing up to Debbie. Claire says she'll think about it, and takes a parental release form. West comes over, and talks to Claire. Claire tells him that they shouldn't hang out because of her parents being over-protective. When West asks if he can talk to her father, she tells him to let it go. West asks her on one date, and she accepts.

Nathan asks Matt why he's questioning his mother in a hospital, and Matt tells him that he knows she's innocent since he can read minds. Matt explains that Angela wants him to back down, but he can't since Molly draws the same symbol that's on the pictures she and Kaito had. Nathan says he knows the photograph and the symbol, and offers Matt help, but he wants five minutes with Angela. Nathan asks why Angela why she's admitting to a crime she didn't commit, and offers her help, but Angela tells him to get sober and get her family back. Angela tells him that she did so many bad things, that it doesn't matter what crime she admits to, and she doesn't want Nathan to die by him helping her. They escort Angela out in handcuffs.

Sylar claims he's been robbed and has been walking for three days. Maya asks where he's going, and he says New York. Maya tells him that she and Alejandro are going there, and shows Sylar Chandra's book. Sylar says he's read it. He asks why they want to meet him, and Sylar says he is old friends with Dr. Suresh. He tells her that he can take them to him. Maya thanks him, and he introduces himself as Gabriel Gray. Maya notes the name is like the angel. 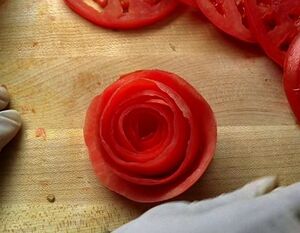 Monica is singing at work, when Camille tells her that she needs to stop. The two talk about their futures and attitude. Monica tells her she took the management training program, and Camille tells her not to get her hopes up. Monica ponders about Hurricane Katrina's effects on her life, and as she looks down, the tomato Monica was cutting is in the shape of a rose. Her manager calls her to the side, and he apologizes to her and lets her know that she's not getting the management position, and for her situation, she cannot leave to anywhere in the state, as the position requires. 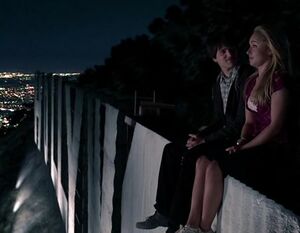 West has a good idea for a date.

Sandra ponders dessert, but Claire tells her that she has to go to the library for a research project. Noah asks if she needs a lift. Lyle reminds her that the car was stolen, but Claire tells them she'll just walk. Noah follows her as she lets her hair down and meets West. Noah comes around the block, but does not see Claire, as she and West fly away.

Nathan tries to find the photo he recognized. Matt tells Nathan that his wife was pregnant with someone else's baby to gain Nathan's trust. Nathan finds the photo and points at different people. Matt recognizes his father in the photo.

Monica recollects the storm and tells Camille that she's special, but feels like God is punishing her for being selfish.

West and Claire sit on the Hollywood Sign, and Claire tells West about jumping off the oil rig in Odessa. Claire tells West she can't tell him certain things, but West tells her that she can open up. He tells her that he shares her fears, and he can't help her if she doesn't trust him. Claire stands up on the sign and jumps off. West catches her, and tells her he doesn't want to see her get hurt. The two kiss over the LA lights.

Micah works on a TV to get the scrambled signal for pay-per-view to unscramble. Micah uses his ability to obtain the signal, and he and Damon watch wrestling as Monica walks in. She watches the match and asks if it's pay-per-view. Damon tells Monica that Micah rigged the cable, and she seems disappointed. Micah tells her he's just trying to help, but Monica tells him that he has to obey the rules. Micah hugs her for a while, and tells Monica that he wishes he could fix her dreams. Monica watches a wrestler perform the "619" wrestling spin move on television. 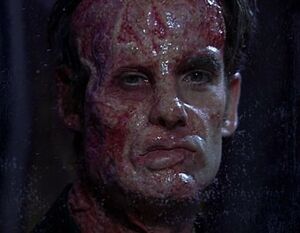 Matt looks at the picture as Molly and Mohinder walk in. Matt asks Molly to find his father since he left when Matt was 13. Matt tells Molly that he stole a lot of money a while ago, and is in hiding. He shows her the picture of his father and Molly backs away. She freaks out and asks him not to look for him. She tells Matt that he's the nightmare man.

Nathan looks at pictures of Peter and puts one on a mirror. He looks in the mirror and sees a grotesque reflection, then punches the mirror, bleeding from his knuckles.

Claire and West land, and Claire worries about the time. They try to think of an excuse, and as Claire leaves, she gives him a kiss.

Derek buys a newspaper and shows Sylar the picture of the newspaper with the siblings' mugshot. Derek tells him they've been riding together for two days, and Sylar tells him to call the police. As Derek goes inside, Sylar takes a brick with him to follow Derek, then comes back to the car alone. Sylar asks Maya if it is them on the mugshot, and she tries to explain. Sylar tells them that Derek is calling the police. Her eyes go black, and Sylar feels its effects. Alejandro uses his ability to reverse it, and Sylar realizes they both have abilities. Sylar decides to drive without Derek, as Derek is dead by the phone, having been killed by a blow to the head with a brick, with a cockroach next to his body. 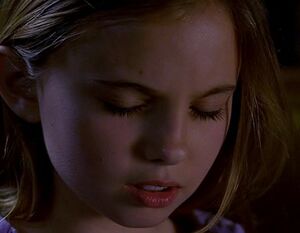 Claire enters her house late, with Noah eating yogurt and waiting for her. Claire lies and tells him that she was trying out for cheerleading and she was late with the squad celebrating. She begs for one thing that's normal, and he tells her that he didn't realize cheerleading meant that much to her. They agree that Claire can cheerlead, but not date for the time being.

Back at the Bennet residence in Costa Verde, Noah steps outside to speak with the Haitian who alerts Noah that to continue their progress in acquiring more Mendez paintings, they will need to go to Odessa. Noah believes he means Texas, but the Haitian shakes his head and says it's in Ukraine.

Mohinder comforts Molly while Matt insists that Molly must find his father. Mohinder accuses Matt of wanting to get back at daddy and Matt makes a jibe at Mohinder's own rocky relationship with his father, Chandra. Molly interrupts the pair and tells them that she will try and find Matt's father.

Monica closes the store when an armed man comes in to rob the place. Monica is held at gunpoint and while the robber approaches the register, Monica then attacks the man by swinging around a pole, disabling the robber. He runs out of the store while Monica and her boss look on in amazement. Monica tells her boss that she learned the move on television.

Molly uses her ability and sees Philadelphia. She is able to tell Matt, despite protests that she will be seen, that the apartment is the third floor, number 9 before she is seen. Molly falls unconscious and Matt hears her thoughts as she cries out for his help.

"Are you reading my mind?"

"He is the nightmare man."

"I had no idea that cheerleading meant that much to you."


"Kinda took me by surprise too."