From Heroes Wiki
< User:CreedogV‎ | The World Entire(Redirected from User:CreedogV/TheWorldEntire/Noah)
Jump to navigation Jump to search

Noah Gray is a version of Noah Gray from the Exposed Future in The World Entire universe. He is a Special and the son of Gabriel and Elle Gray. 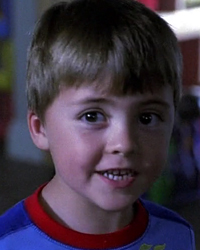 Noah as a small child.

Noah's father Gabriel mourns his death at a Redondo Beach cafe. His mother Elle decides to <tell Peter the story of Noah's birth (Madness in Love). In 2007, after sleeping with Gabriel, Elle finds herself pregnant and gives birth to Noah nine months later. His parents name him after Gabriel's partner Noah Bennet, who is unappreciative of the gesture. Noah is raised at home in Costa Verde, CA by his father, where he grows up not displaying any apparent abilities, until the day of his death (Two Auras). After the story, Elle's grief finally sinks in. Peter resolves to fix the future, but Gabriel orders him back to his own time, telling him to avert the crisis in his own timeline. Gabriel and Elle reminisce about their oddly normal homelife: Elle arrive home late to greet her boys and perform Noah's favorite trick: using her sparks to make his hair stick up on end (Rooting for Love).

In 1989, Angela Petrelli asks Maury Parkman to take the face of a child she's dreamt about and implant in her permanent memory. In 2011, she sends Meredith Gordon and Victor Abano to bag an unknown Special that has injured two hazmat workers in Costa Verde (The Child in My Dreams). In 1989, Angela and Maury visit Carlos Mendez and Angela commissions young Isaac Mendez to draw her a face she has Maury secretly put in Isaac's mind (The Face in My Mind). In 2001, Angela uses Kaito Nakamura to predict the parents of the child in Isaac's drawing, using Victoria Pratt's genetics knowledge. Kaito realizes that the child is the son of Gabriel and Elle Bishop, with resurrection abilities. Indeed, back in 2011, Meredith and Victor discover that the strangely impenetrable Special is indeed Noah Gray (The Blood Between Us). Meredith shuffles Noah into a truck and takes him back to Primatech, where she discovers that Angela knew about the Special being Noah (Second Chances). Noah is reunited with his overjoyed parents, though Elle discovers that his impenetrable skin is very abrasive. Meredith reveals Angela's foreknowledge of Noah's abilities, angering Elle, who relents to let Angela explain Noah's power. She reveals that Noah likely revived moments after conception, gaining electrical absorption to counteract his mother's electricity-filled body. Later, when his Aunt Tracy shows up, he is sent to play outside, eventually accidentally knocks down the metal door of the room (Families). While in bed together, Elle explains to Gabriel that she liked that Noah was the single unplanned thing in her life. She and Gabriel bond over the fact that they can use their abilities on Noah without fear of hurting him (Turning the Tide).

Gabriel and Elle visit Noah in his new "room": a Company cell where he's unable to break anything, filled with metal toys and under the watch of a babysitter named Trisha. He's remind that he can't hug his mother, only allow his mother to hug him. He has his mother do their static electricity trick, though Elle pushes a lot of electricity into Noah, testing his limits. Gabriel wants to scold her, but he has little ground: there are indention where he's thrown Noah into the ceiling and let him crash to the ground. They bring Noah a package of drinking glasses to practice reining his strength; Noah fails the test, and while his parents are flirting, tries to eat the glass before being stopped by his panicked parents unsure if his insides are as durable (An Unbreakable Loyalty).

After Gabriel is tortured into becoming Sylar, he descends upon Primatech Barstow to collect more abilities. Elle leads him down the line of cell, pointing out capture Specials, before enticing him with Noah. Sylar takes the bait and telekinetically throws Noah onto the wall and prepares to take his ability, while Noah is completely unaware of the danger he's in (Returning Ghosts). Once Sylar figures out how to crack Noah's skull, Noah begins screaming. Sylar has a mental breakdown and releases Noah, who races to his mother's side. He asks why his father is crying, and his mother menacingly notes that Gabriel's "in trouble." Noah then realizes that by gripping his mother's leg, he shredded her pants and scraped up her leg, but Elle forgives him. When Gabriel shows true remorse about almost killing Noah, she forgives him, too. Later, in bed, Elle explains that she never had any fears of losing her son, who was unlikely to die, but had to save herself to protect Noah just in case (Beckoning Titans).

A content Noah is seated on his father's shoulders while Angela explains Arthur's condition and the new organization of the Company (The Moments to Come).

Noah was mentioned as playing with Hannah while being babysat by Trisha in 2015.

In 2029, Noah is an agent with The Company, stationed in Barstow with his parents. He is visiting Primatech Headquarters in Hartsdale when Peter, Claire, and Hannah arrive from their transfer. He speaks with Daniella Parkman, who he has a crush on, though she is oblivious to his affections. While in New York, he attends a therapy session with her, relating the stressful and dangerous life he's lived.

Noah was selected to be part of the team to face the Sixers. He is told about the mission by Sparrow Redhouse.

Noah has the ability to revive after death with adaptions against the cause of death. He presumably lost it and had it returned synthetically by Peter.

"I don't know if I didn't. I mean, every time... it happens, I get stronger. There's a high cost: pain and death, but I'll admit it's tempting. But... I know what you’re thinking."