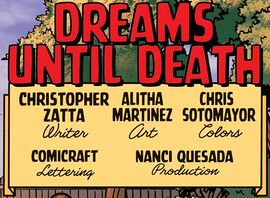 Gael is driving with Bianca, having been sent after Sylar by the Company. Sylar had been spotted in the area of the Bennets' home, and they were the closest agents to the scene. As they approach the scene, Bianca asks to hold Gael's hand, and that he not let Sylar gain her ability. Gael agrees to not let that happen. Just then, Gael spots Sylar walking down the street and parks the car nearby. As they jump out of the car and Bianca orders Sylar to the ground, Gael thinks back on the life he could have had with Bianca, now believing they are both about to die. He imagines getting married to Bianca, their honeymoon, having children, giving them away to marriage and celebrating Christmas with their new families as grandparents.

After completing the daydream, he joins Bianca in tasing Sylar. However, it has no effect and Sylar uses telekinesis to thrust them across the hood of their car. Bianca manages to pull out her gun and fire a few rounds at Sylar, but he is unaffected due to having obtained the ability to heal himself. Sylar then jumps onto the hood of the car and asks which of them is the special agent, and Gael replies he is. Sylar responds by killing Bianca, and then splitting Gael's head open. Realizing Gael lied, Sylar throws Gael onto the ground next to Bianca and drives off in their car; and as he dies, Gael takes hold of Bianca's hand. Gael notes that he fulfilled his promise and now they will be together forever.