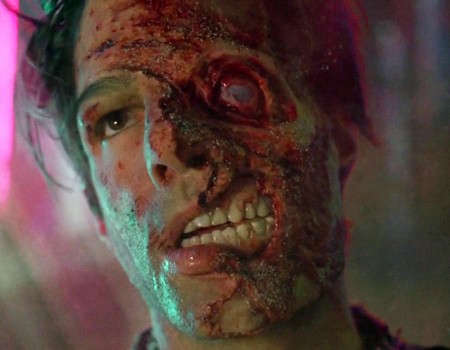 They don't appear to be wrapping things up....

They actually seem to be opening more story lines. My issue with this is that the season, being rather short this year, will be over soon. I really hope we end up with satisfying answers, especially if the rumors that Heroes has been cancelled are true. I did enjoy Samuel's ownage of Sylar however.--PJDEP - Need further explanation? 23:01, 4 January 2010 (EST)

I don't think that they totally forgot about season 2, if not they wouldn't speak about West, but they spoke so actually the writers still remember about season 2 charcaters. But the way they do it, I don't find it too pleasant, if they spoke about him and if Peter really took the power from him, they should've shown the character even just for few sec.s giving the power to Pete... Which brings us to something else... I'm not sure if really Peter got the power from West or not. Logic may dictate: They spoke about West on the roof - Time passed - And Peter was flying, - So, Pete got it from West. But emotionnaly, the way they showed us, Peter looking at the picture of his brother - And then flying, this is a reminescence of Season 1, where Pete was getting slowly accustomed to use his ability and trying to remember how the people around him made him feel and than/thus he would manifest the related ability. Actually, I was thinking like this, while watching..."ok, any minute they will show West now... ok, please let them show West (and than Peter looks at the picture and flies)...Wow, Peter got his original ability back, that's superb, let's see what'll happen next, oh and he didn't need West... =))) Thus I though while watching...But though I'm more inclined to think logically and say he got it from West, I think the writers left that door open for us, at least for a week, we can't know for sure, if Pete got empathic mimicry back, or if he go the power from West :)= -- Jan Rodrigo (talk) (contributions) 07:53, 5 January 2010 (EST)

So powerless Peter is just as reckless as powered Peter, only a lot less cool. Also, they took Peter's power and gave it to Sylar. Maybe they'll kill Peter, and this time when they make Sylar think he's Peter it'll work. I am kidding, of course; I just hope they make Peter more interesting to watch. Ruler 08:12, 5 January 2010 (EST)

Peter asked Claire if she was going to stay and she said she had to get to school in the morning. It was late at night. Would West really have flown out there and then? Also, right after Claire saw the abandoned CB radio they did a fly over of the city and made the flying sound as if someone was actually flying. Plus, the radio was abandoned on the roof with the distress call still playing so would Peter have had the time to run down stairs and out of the building?

The other thing I noticed is in the flashback scene with Nathan in the trunk and during the funeral Peter has a cut on his lip. As soon as Claire shows up the cut is gone and remains gone. That puzzles me too though because he still took Claire's ability after the fact. He also made a concerted effort to empathize with the shooter and Angela specificlly mentioned that he's more empathetic that ever. What if he is realizing how to get abilities back but Peter doesn't want everyone to know for some reason? User:hr220a 09:12, 5 January 2010 (EST)

I doubt she told you everything

Can someone get a screen shot of Edgar's list? As I understand it several people have abilities listed with their names. Joseph being one of them. --OutbackZack 20:21, 5 January 2010 (EST)

Looks like a not fully thought through prop to me. "Game Operator: telekinesis" - yeah, 'game operator', really narrows it down a the carnival right... And Edgar doesn't know his name? Also the bottom line appears to say "makes things grow" - perhaps referring to Ian... who Edgar hasn't met... And Edgar himself is listed on there, when surely this is a list of people they might come up against when capturing Samuel? Also... "Fire Breathing Family: Fire Breathing" no duh! I'm not sure this is a good source for canon information. But good screen grab, even just for curiosity's sake. --EkimCF 12:20, 6 January 2010 (EST)

I was just reading the above post, and I thought I should probably send an email to Jim Martin asking him what all the names say (and if there are any that we can't see). Then I thought that I would put together a couple questions to ask Jim. Not an interview or anything, but just any questions about the episode that people still had. I can't promise I'll ask everything, and I'm not going to ask anything that doesn't relate directly to what he wrote...but below, feel free to ask anything that you would like Jim to explain more or clarify for us. :) -- RyanGibsonStewart (talk) 22:39, 5 January 2010 (EST)

When Claire and Peter were in the kitchen cutting lemons and limes. And she said "He gave me such a grief about dating someone who could fly... And father issues" or something like that, was she talking about Nathan or Noah. I was kind of confused... Cause, i don't think Nathan ever met West.. I'm not sure. Can someone help? hahahaha. --Scorvi12 09:40, 7 January 2010 (EST)

This episode still needs images for in the summary section, somebody wants to add them?-- Yoshi | Talk | Contributions 12:57, 10 January 2010 (EST)

Does anyone else think that the last point in the summary should be changed to "Noah interrogates Edgar about the Carnival"? I think we should since Lauren didn't actually speak to Edgar or have anything to do with him (aside from giving Noah the sodium pentathol) --Leckie -- Talk 13:26, 5 April 2010 (EDT)