Graphic Novel:Hanging By a Thread 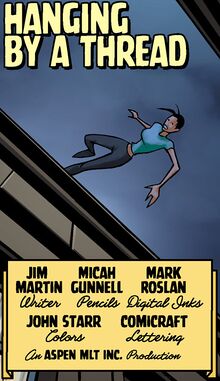 Rachel Mills runs across a rooftop, chasing Howie Kaplan, a target of Building 26. When they get to an opening, Howie uses his ability to throw oil at Rachel's feet, causing Rachel to slip and begin to fall towards the ground. Rachel, with no other choice, teleports back onto the rooftop and whacks Howie, but accidentally knocks him over the edge of the roof. She grabs onto his wrist, and starts interrogating Howie while he holds onto her for dear life. Suddenly, Rebel sends her a text message telling her that she's starting to act like Angela Petrelli. Rachel realizes that Rebel is right, and then has a flashback.

Rachel recalls that Angela had forced her to embrace her ability, not letting her deny it and driving her to the brink. Eventually, when Rachel used her ability to escape Angela's grasp, she had let her go. Influenced by this, Rachel decides to let Howie go as well. Jason Pierce and a masked agent come running, and Rachel realizes that she must not let them witness what she is about to do. She deliberately throws herself over the edge, and then teleports both her and Howie to the ground. Howie realizes that Rachel is "special" too, and Rachel tells him that he should get away fast. Howie thanks her, and Rebel instructs Rachel to go back and make up an excuse.