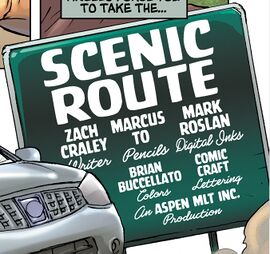 Noah takes a route across the United States of America that takes him from Washington, D.C. to the Pyramid Arena in Memphis, Tennessee, the Burnt Toast Diner in Midland, Texas, Carlsbad, New Mexico, and Coyote Sands, Arizona.

Noah is driving in his car when he receives a video message from Angela. She tells him to meet her at Coyote Sands and he hangs up. He thinks about his life, and suddenly, West flies onto his car. He pulls over and talks to the young man about why he is there. The two get in the car and West explains that Rebel is helping him. West needs Noah's help to save Alex. Alex is chased by a helicopter near the Cavern Theater in Carlsbad, New Mexico. The agents inside get a shot on him and prepare to fire. West flies onto the helicopter's screen and blocks their view. Noah manages to get Alex into the car and they drive to a bridge. West flies to them and says that he will not be able to carry them all away. Noah tells Alex where to meet them and gets West to fly away with him. Alex dives into the Pecos River and resurfaces one hour later in the Carlsbad Caverns. Noah leaves Alex and West, headed towards Coyote Sands.