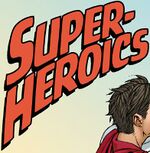 As Peter Petrelli lies comatose in a New York City hospital after collapsing outside the Odessa Sheriff's Department, he has a dream that he's a comic book superhero, battling against a virtually indestructible flying villain called "The Rocket". When he finally succeeds in defeating the villain, however, Peter realizes that the villain is himself, despite his protestations that he is meant to be the hero.